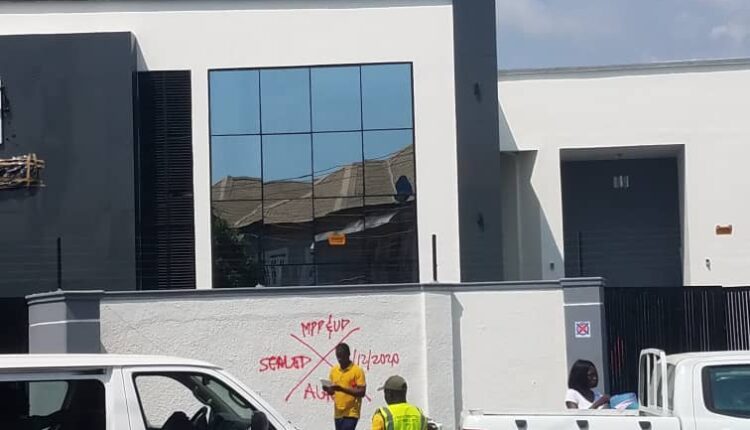 Share
Atleast 16 buildings in Lekki, Eti-Osa Local Government have been sealed by Lagos State Government for violating the planning permit law and other contraventions listed by the state laws.
The structures put under lock were sited on Babatope Bejide crescent, Utomi Aire Avenue, Bashorun Okunsanya street, Kola Adeyina close and Yaya Dosunmu street.
They were sealed by the state enforcement team at the Ministry of Physical Planning and Urban Development to prevent cases of collapsed building in Lagos.
Confirming the seal, the ministry, in a statement by its Public Affairs Officer (PAO), Mukaila Sanusi, said that the closure was to enforce the state Physical Planning Law as well as protect citizens in the state that could be affected when the building probably cave in.
Sanusi, in the statement made available to The Guild on Sunday, stressed that the affected buildings were unapproved by the government and that it is a contravention of the law.
He said: “LASG intensifies Physical Planning Law Enforcement in Lekki at the weekend, seals 16 unapproved buildings for lack of Planning Permit, over density and other infractions.
“Streets covered include: Babatope Bejide crescent, Utomi Aire Avenue, Bashorun Okunsanya street, Kola Adeyina close and Hon. Yaya Dosunmu street”, the ministry spokesman added.
The enforcement came days after Commissioner for Physical Planning and Urban Development, Dr.  Idris Salako, urged Property owners and developers to perfect their planning permit applications to avoid delays as the process was clear and  seamless.
The Commissioner averred that except for those that would like to cut corners and make mischief, the requirements for Planning Permit were not cumbersome but necessary to regulate the built environment and give room to  seamless development of the State.
” Often times, delay does not come from the Government but failure of Developers to perfect their documents or get the necessary sign-off from relevant MDAs,  where applicable” he said.
He buttressed that while the power to grant Planning Permit rested solely with the Lagos State Physical Planning Permit Authority( LASPPPA), the sign-off of other Ministries and Agencies such as Ministry of Transportation and Office of Drainage Service  was necessary in some situations as development activities within the  State revolve around many agencies.
” For example, LASPPPA will not issue Permit to any development proposed along drainage alignment or road setbacks without clearance from the Office of Drainage Services and Ministry of Transport respectively” he added.
Other MDAs whose clearances may be required before granting Planning Permit are the Lagos State Fire Service, the Police, Lands Bureau, Office of the Surveyor General, Nigerian Railway Corporation, Nigerian Airport Authority, Department of Petroleum Resources, Ministry of Waterfront Infrastructure Development, Lekki Concession Company, New Towns Development Authority and the Lagos State  Development and Property Corporation among others.
According to Salako, to further simplify the Planning Permit process, Government had implemented some reforms and set Service Level Agreement of 28days for processing Planning Permit.
He says: “as part of the reforms, we have  increased the number of Supervisory Directors and District Officers and devolve Planning Permit Approvals down to the level of district officers”
He stated that efforts at streamlining the process had yielded positive results, among which is the fact that the 28days Service Level Agreement had become more and more feasible with applicants getting Planning Permits within the stipulated time, adding that as at October, 1,726 Permits had been granted for the year.
He urged applicants to take advantage of the electronic  Planning Permit platform for ease of application. He also stated  that applicants can  take advantage  of the fast track option for  those who wish to quickly deliver on their projects.