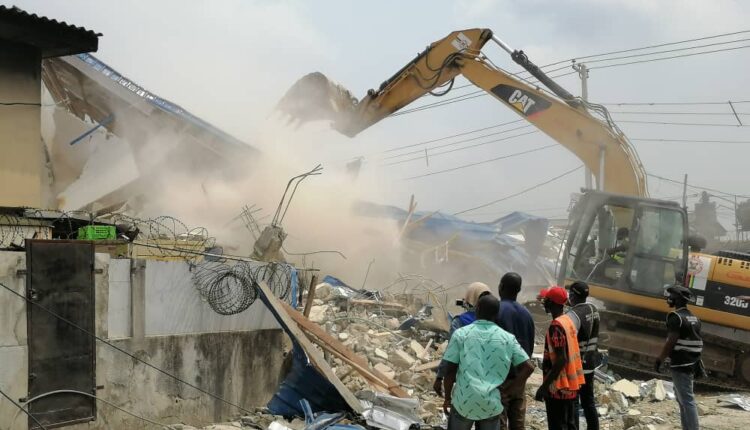 The Lagos State Building Control Agency (LASBCA) has demolished a building at the Ilupeju axis of Lagos State for obstructing drainage channels and lacking building approval from the government.

Aside from obstructing the drainage channel which it was built on, the agency explained that the demolished property was an illegal structure with a wall fence and zero provision for airspace.

The agency’s General Manager, Arc. Gbolahan Oki, said that the demolished structure had previously been served all statutory enforcement notices in line with the Lagos State Urban and Regional Planning Development Law of 2010 with no response from the owner, developer.

Speaking on Monday after the demolition exercise, Oki said that the removed building was identified by a team of LASBCA monitoring officers in August 2020, and that all efforts by the agency to prevail on the owner to followed the stipulated laws proved abortive.

According to him, the decision was taken after a thorough engineering appraisal and monitoring of the building by the Agency with a view to ensuring a better physical planning environment for sustainable development and averting needless loss of lives and properties.

Oki added that the demolition was a signal to a would-be recalcitrant developer planning to circumvent government rules and regulations as provided by the law, saying any illegal structures would be removed by the agency and that cost of such removal would be paid for by the owner.

“We have times without numbers advised building owners, developers to seek authorization from LASBCA, hire the services of relevant building professionals, speak to safety, and test their building materials before commencement of building construction subject to the type of structures they are putting in place to make the buildings safe, secure and fit for habitation,” he said.

The LABSCA boss, however, reiterated the state government’s commitment to zero tolerance of unapproved and haphazard building construction in Lagos, adding that building owners and developers should desist from starting building projects without obtaining necessary building approvals.