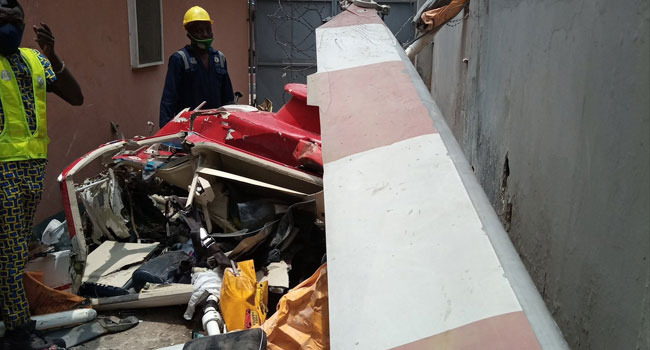 In an effort to put smiles on faces of owners and occupants of buildings at 14 and 16, Salvation Road, Opebi axis of Lagos State, the State Government has begun post-disaster reconstruction of the Opebi Helicopter crash site.

The development followed Governor Babajide Sanwo-Olu’s pledge, made in company of Hon. Commissioner for Special Duties and Inter-Governmental Relations, Engr. Omotayo Bamgbose-Martins and the DG/CEO of LASEMA, Dr. Oluwafemi Damilola Oke-Osanyitolu on Saturday during a hands-on visit and post-disaster assessment of the crash site.

The Guild had earlier reported that a Bell 206 Helicopter, belonging to Quorum Aviation, traveling into Lagos from Port Harcourt, the Rivers state capital with two crew members and a passenger crashed in-between the said residential buildings last Friday.

Speaking on the commencement of the rebuilding process, LASEMA Director-General, Dr. Olufemi Oke-Osanyintolu, said that the agency stated the agency would conduct integrity and impact assessment tests on the affected buildings as well as within 100 meters radius of the entire disaster area as directed by Mr. Governor.
“Reconstruction of the affected fence and buildings at 14 and 16, Salvation Road, Opebi in Ikeja, destroyed by the helicopter crash, commenced Monday morning, following Mr. Governor’s pledge during a working visit and post-disaster assessment of the crash site,” the LASEMA boss was quoted as saying in a statement released to newsmen by the agency’s spokesman, Nosa Okunbor.
Sanwo-Olu had on Saturday promised that the government  would conduct integrity tests on the affected buildings within a hundred meters radius and do necessary repairs to assist the affected families by restoring normalcy as quickly as possible.

“I am here to do a real on the spot assessment and I have seen things for myself. We thank God that as painful as the incident might be, the damage was not beyond what we have witnessed. We are pained by the death of the three people on board but we thank God because it could have been worse than that. The affected buildings are residential homes that have citizens living there. As at the exact time the helicopter crash happened, a lot of people were not in the premises and even the elderly people that were around and in their rooms. But as God would have it, nothing in terms of fatality, happened to people on the ground. So, we need to thank God. If not, fatality may have been a lot more than what we are talking about.

“As you can see the people affected are senior citizens; they are people in their 80s and 70s that I have come to condole with and also thank God for them. We have seen the level of destruction and damages. Tests will be conducted to understand the integrity of the buildings and once that is ascertained today or tomorrow, we will start work with the federal agencies. We will start the reconstruction and renovation of the places affected by the crash; the rooms, walls, tents and ensure that we quickly bring respite to the senior citizens that have been affected.

“From Monday, we will start rebuilding the damaged structure and also assist in any areas the owners of the buildings need our assistance. We will also assist the senior citizens wherever they need help. We know that the incident has had some impact on them. We will give them whatever support we can give them to reduce their psychological, physical and emotional hardship, which may have been caused by the incident. We would be doing that for them as a government. The whole essence of governance is to ensure that once your citizens are affected like this, government need to rise up,” the Governor had said.