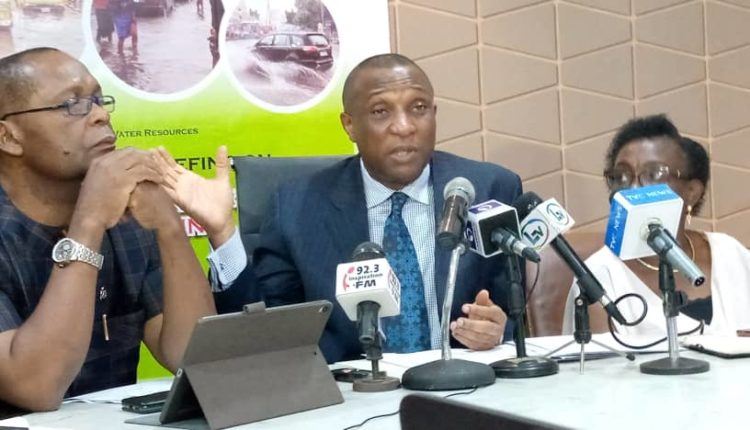 Ahead of the rainy season, Lagos State Government has predicted that the state will experience 270 days of rainfall this year, asking residents of low-land areas to vacate the axis.
Assuring that strategies that would help to mitigate flooding would be adopted, the state government added that the projected maximum annual rainfall for the state is 1, 750mm.
The prediction came days after Nigerian Meteorological Agency, NiMET, released 2020 Seasonal Rainfall Prediction (SRP) report to guide various sectors of the country, with an expected high volume of rainfall.
Announcing the prediction at a press briefing held in Alausa Secretariat, Ikeja on Tuesday, Commissioner for the Environment and Water Resources, Tunji Bello, hinted that Lagos Island was expected to have a rainfall onset date of March 19, this year, adding that, its cessation date is expected to be November 26.
Ikeja, the state capital is expected to have about 1526mm, while that of Badagry is put at 1750, with Ikorodu and Epe at 1690 and 1730 mm respectively.
The commissioner, however, urged residents to desist from an indiscriminate refuse dump into water channels in order to reduce effect of flooding that could possibly accompany the expected heavy rainfall.
While urging residents not to panic at the prediction, Bello said:  “I want to assure you that our state will continue to reap the gains of planning, as our flood control measures are being stepped up to contain any unforeseen weather condition.
“I am glad to note that relevant measures have been put in place in preparation for the year 2020 rainy season,” he said.
Bello,  noted that a contributory factor to possible flooding in the state is sea-level rise, which he lamented poses the biggest risk to coastal areas and the state drainage infrastructure
” Anytime there is high tidal movement, it may lock up the discharge points of drainage channels and until it recedes, there will be no, drainage”, he said.
To effectively contain flooding, Bello said the state was determined to maintain the long-established synergy and partnership with Ogun-Osun River Basin Development Authority which he assured had ensured control and monitoring of the steady and systematic release of water from Oyan Dam to prevent flooding of the downstream communities.