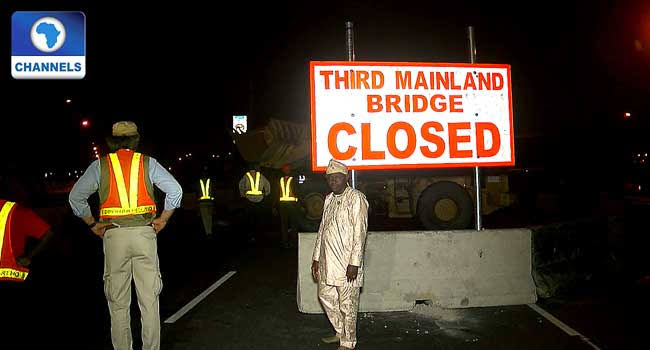 In a bid to fast track ongoing repair works on Third Mainland Bridge, the Lagos State Government has concluded plans to shut down the facility completely to avoid vibration during casting.

The state government stated that the bridge would be a total closed between Adekunle and Adeniji section for the second time from midnight of Friday 30th October to Sunday 1st November 2020.

Confirming the closure, Commissioner for Transportation, Dr. Frederic Oladeinde, said that the closure was for the second phase that should have been completed two weeks before now but delayed due to the mayhem around Lagos metropolis.

Oladeinde, who disclosed the closure on Wednesday, noted that the closure was essential to prevent vibrations on the bridge during the casting-in-place of the newly installed expansion joints.

The commissioner added the closure would allow the special concrete to be done by the contractor to achieve its required compressive strength.

Through a statement by the ministry head of Public Affairs Unit, Bolanle Ogunlola, he argued that earlier explained that the casting of the expansion joints will be in two phases due to the number of expansion joints that will be casted and to effectively manage the attendant traffic, hence, repair works slated for weekends to minimize inconveniences that may arise from the total closure.

Appreciating the patience exhibited by Lagosians from the commencement date of the project, Oladeinde hinted that the previous alternative routes remain the same for road users to utilize during the closure period, while LASTMA and other Traffic Management Agencies will be on ground to direct traffic for easy vehicular movement.
The Transport Commissioner also assured that the section of the bridge between Adekunle and Iyana–Oworo still remains open, as well as Ebute Metta outbound section into Iyana-Oworo.
The State Government is hereby appealing to residents of the State, especially motorists that ply these corridors to stay calm and key into the various measures put in place in order to achieve the January 2021 deadline for the completion of the project.