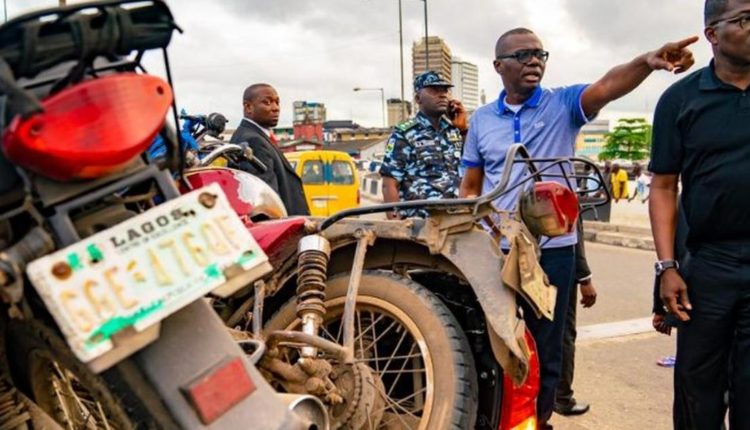 The Lagos State Government has ordered arrest of officers of Nigerian Army, Navy, Police and other security operatives engaging in commercial motorcycle and tricycle operation on restricted routes in the state.

According to the government, any uniform officer riding commercial motorcycle on restricted routes is flouting the State’s Transport Sector Reform Laws and should be arrested.

The pronouncement was part of the issues discussed during a security meeting held at the State House in Marina on Wednesday, which was chaired by the state Governor, Babajide Sanwo-Olu, chaired the meeting and attended by Commanders of all security formations in the State.

Briefing pressmen after the meeting, Commissioner for Information and Strategy, Gbenga Omotoso, said the enforcement of the restriction order would be executed with more force to completely keep Okada and tricycles operators away from restricted routes.

Members of the Security Council, the Commissioner said, frowned at a situation in which uniform men flouted the State’s Transport Sector Reform Laws, warning security operatives, especially police officers and military personnel, to stop taking passengers on their motorcycles on restricted routes.

Omotoso said: “We have just concluded the State Security Council meeting, where we reviewed the ongoing enforcement of Okada and Keke restriction order in the six Local Government Areas. Matters concerning uniform men engaging in commercial motorcycle operation came up in our discussion and there has been an order restricting them from doing that.

“Only a uniform man who is fully kitted and who rides a motorcycle as his own personal mode of transportation is allowed. If any uniform man ventures into commercial motorcycle operation or Keke, the action of such a person is illegal and such persons are going to be arrested if they are caught.”

The Commissioner reiterated that the State would not relax the laws restricting Okada and tricycles on the highways, praising Lagosians for standing firm behind the Government in the ongoing enforcement of the restriction order.

On the closure of Eko Bridge, the Commissioner said the Government would work assiduously to lessen the pain of commuters plying the route. He, however, noted that the closure of the bridge was a necessary precautionary measure taken to avert an incident that may result in loss of lives.

The commissioner urged residents to continue to support the government’s efforts at securing the State, stressing that the Sanwo-Olu administration would deploy all resources to ensure safety of lives and property in Lagos.

“About security, Lagosians should be rest assured that Government is on top of the situation and that all is well. Every action we take is to show that we put the interest of Lagosians at heart and their welfare is on the front burner at all times,” Omotoso said.