Nigerian banks lose over N5bn to ATM frauds, others 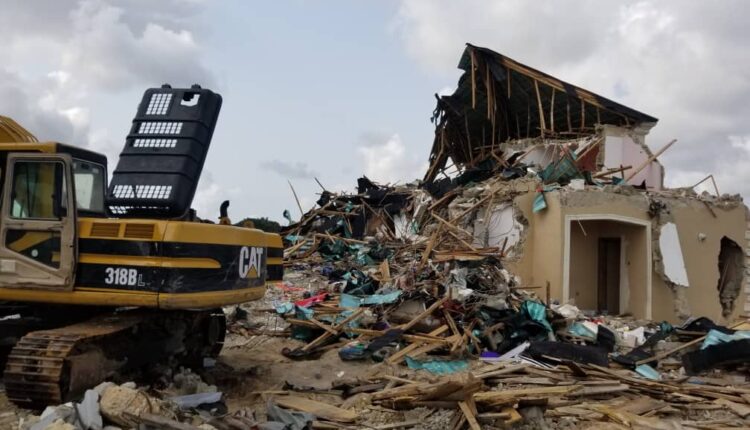 Share
There is acrimony between Lagos State Government, Nigerian Institute of Oceanography and Marine Research and the Elejigbo family of Langbasa community in Eti-Osa Local Government over the demolition of properties worth several millions of naira in Silverpoint Estate.
While the family alleged that property in the estate were demolished by the government with aim to acquire the land for private use, the government stated that the buildings were erected on its lands and without acquiring permits before putting up the buildings.
As gathered, structures in the estate were pulled down by Ministry of Physical Planning and Urban Development on March 6th, 2020 on the allegation that the owners encroached on Lagos state government land and that the buildings were illegally erected by the owners.
The Elejigbo family has however disagreed with the government stance on the land and structures formerly erected on it, describing the demolition exercise as illegal and that it was at variance with Lagos law on urban development.
Alleging that structures on the land were pulled down not for public interest, the family lawyer, Tayo Omosehin, said that the occupants of the buildings were evicted from their buildings without prior notice and were not provided with any alternative accommodation.
“The law they are hiding under, they have goofed, under that law, if you do not have building permit, the government will serve you notice to go and get it and if you refuse and your building fails integrity test, you will be asked to pull it down yourself and if you don’t, the government will demolish it and you will pay for the cost of demolition, this set of occupants were not given that window”. 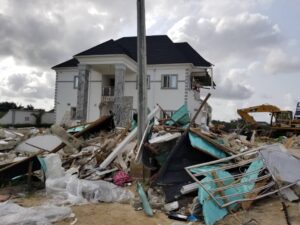 Omosehin, who alleged that the demolition exercise was led by an official of  Ministry of Physical Planning, Muritala Balogun, stated that leader of the enforcement team was aware that none of the occupants were served notices for their action.

“Ask Muritala Balogun of the Ministry of Physical Planning, if they gave us notice, ask him to produce the evidence of the notice, when you serve notice you paste it on the building and take photograph footage of the pasted notice so that nobody puts up a denial, ask him for that.”Of course, I received a letter in my office which was dated May from Muritala Balogun in June this year, the letter was just to justify the demolition they carried out in March while referring to a notice they served in year 2016 and another in 2018, but he failed to back up his claim with an evidence of service. 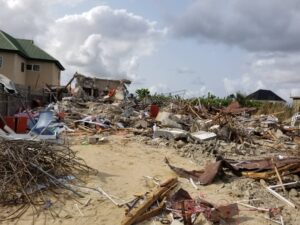 “I have interfaced with Mr Muritala, I happened to pass through his office on the 5th of March when he was talking to an officer over the phone that they could not cash the cheque given to them by the Institute of Oceanography and that they should come and re-validate the cheque, The following day, 6th of March, they rolled in their bulldozer and started demolition.  We later discovered that it was a sponsored demolition by the Institute of Oceanography.

Before the demolition, a large portion of the land was said to have been given to Lagos State government in 1981 by the family for the purpose of growing forestry, subsequently administration in the state deviated from the original purpose and gave 20 hectares of the land allocated to it by the family to Nigerian Institute of Oceanography and Marine Research.

As we speak, the Institute has been selling the land, a portion was sold to someone who has built an Event Centre there, another potion to a Lebanese who is using it for another purpose. Funny enough, where houses were demolished were not even within the 20 hectares that was mapped out in the C of O  given to the Institute.

On the claim that the Institute wrote them a petition that they have encroached the land, the lawyer said, “under the law of allocation, the moment you give an allocation to a body,  title has left you, you cannot go back to the land to do anything because they wrote you that some people encroached on their land, the best thing for school of Oceanography to do is to go to court and get a court order, it is not the state that will carry out that demolition”, Omosehin added.

Meanwhile, responding on behalf of  Lagos State government,  the Director, Technical Services, Ministry of Physical Planning and Urban Development, Mr Muritala  Balogun said, “I was posted to this office in Dec.2018 and I met a letter written by Nigerian Institute of Oceanography and Marine Research informing the government that the land allocated to them has been encroached upon by unknown persons.

In line with our practice, we try to investigate by serving expulsion notice, expecting the owners to respond to the notice especially with an approval from the ministry to develop those houses, we discovered none of them has a building permit to build the house.

There is a survey plan attached to the C of O given to the institute by Lagos state government, so our survivor went to the site to establish the boundary of the land so that we won’t go there and be removing property that are not part of the land, after establishing that , we gave them notice to stop building, as at that time, they have not started construction, some were just at the foundation level, some at the window level”, he explained.

On whether demolition is the sanction for lack of building permit, he also explained that, “once you have a building that is developed within an area they cannot get title document for, it is an illegal structure, based on that we asked them to stop construction, they refused, most of them went ahead and complete their buildings ,while we were trying to follow due process for getting approval to remove those illegal structures, we went there again to inform them when the approval was given so they would not be caught unaware,

“As soon as approval was granted, I have no power to stop the demolition except the authority that granted the approval. When we got to the site, after working for some hours, you know we cannot work without police protection, we got an order from above that all the men providing security for us should withdraw from the site .

“That was shortly before the lockdown in March, after the lockdown , we got the information that they all went back to site and continue construction, so last week, the commissioner directed that I should go and confirm the status of the place, which I have done, I have written my report based on what I saw, if the commissioner ask us to back and demolish the structures again, I have no choice than to obey”, The Director explained.

From the Institute of Oceanography and Marine Research, a Director of Administration who did not want to be quoted nor her name mentioned could not ascertain if the Institute wrote any petition to the Lagos State government but she confirmed that they reported at Langbasa Police Station when they discovered their land was being encroached upon. 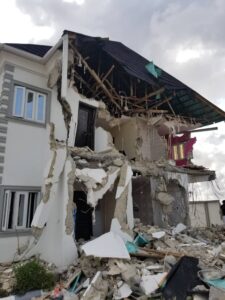 She, however, directed the reporter to meet the Executive Director whom she said would  be able to shed more light on the matter.

Just in: Minister, lawmakers, others lay Ajimobi to rest amid eulogies