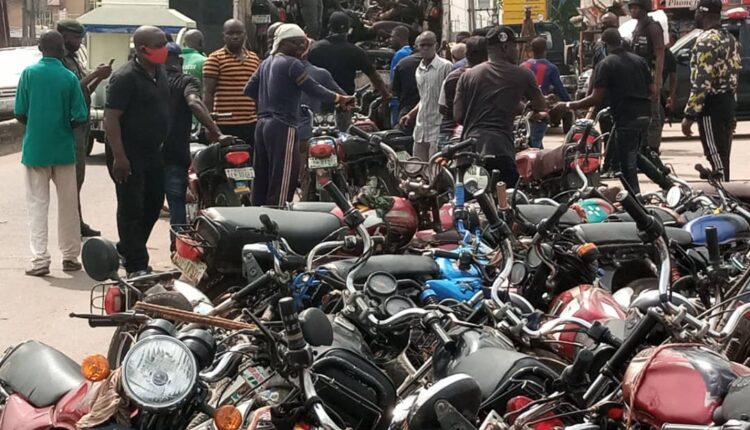 No fewer than 130 commercial motorcycles have been impounded by Lagos State Government for plying restricted routes across the state in contravention of the state’s traffic laws.

The motorcycles were impounded for operating illegally on restricted routes at Iyana-Ipaja, Abule-Egba, Fagba, and Ogba area of Lagos by operatives of the Lagos State Task Force, a unit under the state’s Police Command.

Confirming the development, the new Chairman of the Agency, Jejeloye Shola, who led the enforcement team, disclosed that the operations were carried out after operators of the motorcycles failed to adhere to several warnings which include desisting from operating on restricted routes, particularly highways and bridges across the State.

Through a statement released to newsmen on Monday by the team’s spokesperson, Adebayo Taofiq, Shola said that the operations also followed series of complaints received from the public on illegal and criminal activities perpetrated by motorcycle operators.

“While some of them harass innocent members of the public at various bus-stops, others engage in all sorts of criminal acts by dispossessing their passengers of valuables such as phones, pieces of jewelry, and bags. Also, motorists held in traffic both morning and night around these areas were not spared,” Shola was quoted as saying in the statement.

Furthermore, he hinted that the team would be intensifying efforts to clampdown on illegal activities of motorcycle operators on restricted routes and that plans had been concluded to sustain the operation on daily basis throughout this Yuletide season.

He urged various motorcycle rider associations across the state to educate their members on all 475 restricted routes and the life-threatening danger surrounding plying high-ways and bridges.