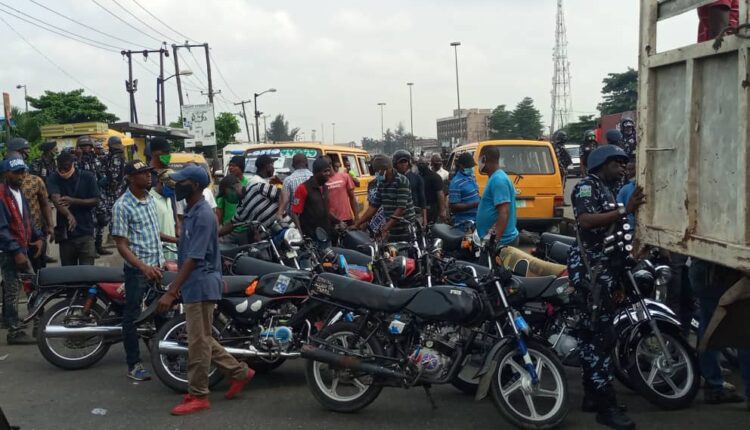 No fewer than 100 commercial motorcycles have been impounded by the Lagos State Environmental and Special Offences (Enforcement) Unit (Taskforce) for plying restricted routes for illegal operations which contravened the state’s traffic laws.

As stated, the clampdown on illegal commercial motorcycle operators was in continuation of government efforts in ensuring sanity on Lagos roads and to get rid of defiant motorcyclists on restricted routes across the state.

Leading the enforcement exercise, the taskforce Chairman, CSP Shola Jejeloye, disclosed that the 100 commercial motorcycles were impounded around Navy Town at Alakija, 2nd Rainbow and Festac Town axis of the state.

According to him, the enforcement operation was carried out to halt the abuse of traffic laws by motorcycle operators and that restore sanity on Lagos roads.

He added that the influx of illegal motorcyclists into the state without any traceable address and valid means of identification remains a huge security and safety threat to Lagosians.

The infux, Jejeloye alleged, was contributing to increasing usage of motorcycles for criminals as a means to escape after criminal activities across the state.

“The discouraging high statistic of motorcycle accidents and the compelling need to enhance safety on Lagos roads led to the promulgation of the Lagos State Transport Sector Reformed Law 2018.

“In accordance with the Law, every motorcycle operators must wear crash helmets, be above 18 years, not ride on kerb/median/road-setbacks, avoid restricted routes, not carry more than one passenger/pregnant woman/adult with baby/child below 12 years, not install any musical gadgets, must wear apron, not operate beyond 10pm, operate with a rider’s permit and have their motorcycle registered with Government” he said.

While warning the general public, especially motorists to ensure that their valuable items are safely kept while in traffic, the taskforce boss, enjoined all residents to provide useful security information about criminal activities around them to security agencies for proper actions to be taken.