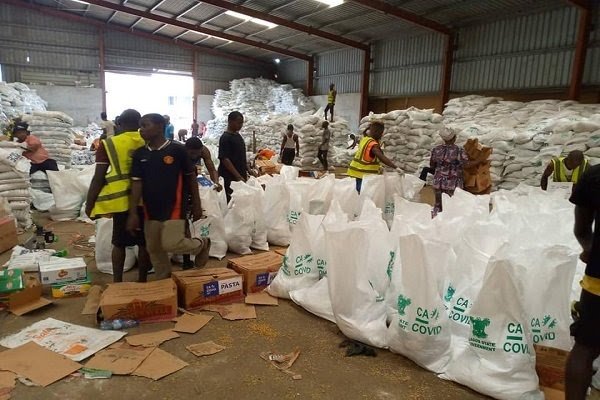 The Lagos State Government has condemned activities of some residents who stormed, vandalised and looted the warehouse at Mazamaza area of the state where COVID-19 palliatives were stored for onward distribution to other states and deserving beneficiaries.

This was coming on the heels of series of video clips that emerged online showing residents of Amuwo-Odofin axis of the state in a free-for-all manner packing out bags and cartons of the palliatives in the warehouse while accusing the government of hoarding supplies meant to cushion the pandemic’s effect on citizens.

The state’s Acting Commissioner for Agriculture, Abisola Olusanya, said that contrary to widespread rumours that the government was hoarding palliatives, the items looted were the food palliative packages donated by the Private Sector Coalition against COVID-19 (CACOVID) group.

Clarifying the claims through a statement released on Thursday, Olusanya said that the looted items belong to all Southwest states as against social media reports that they were all for Lagos.

According to her, Governor Babajide Sanwo-Olu had on September 22nd 2020, formally taken receipt of the food palliatives from the CACOVID team meant for distribution to the indigent.

“The state had repackaged its share of the consignment and was distributing it before the protests that have affected activities in the State. The repackaging was being done to account for every beneficiary, according to the agreement with the CACOVID Group, which monitored the process.

“The warehouse in question is not state-owned and its usage was made available to the CACOVID group. The distribution was on-going but had to be halted due to protests, before the invasion of the warehouse today.

“For effective distribution of the food palliatives, groups such as Transport Unions, Ethnic Groups, Religious Associations, Artisans and Tradesmen Association, Marketmen and Women Association, People Living with Disabilities, Orphanages and Old Peoples’ Homes among others were being used as the distribution channels to their members.

“The State Government, however, regrets the invasion of the warehouse and appreciates the support offered by the CACOVID group to the citizenry of Lagos,” the statement said.