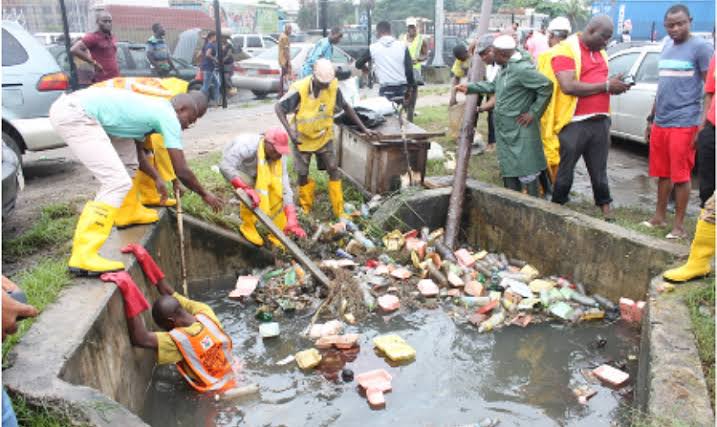 The Lagos State Government has blamed indiscriminate dumping of refuse into drainages as major cause of deplorable nature of roads across the state.

It stated that the waste dumped in drains affect free flow of water which later spill on the road, cause flood and accelerate dilapidation of the roads after the asphalt surface becomes water logged.

According to the government, a lot of dangers were associated with indiscriminate dumping of refuse into drainages and that such action is capable of reducing the life span of the various road infrastructure across the state.

The Special Adviser to the state Governor on Works and Infrastructure, Aramide Adeyoye, who bemoaned the rising cases of indiscriminate dumping of refuses, which he attributed as cause of flooding, said sought support and cooperation of Lagosians on the need to take ownership of provided road infrastructure.

Adedoye spoke while inspecting urgent palliative works being carried out by Public Works Corporation on the Mile 2 section of Lagos – Badagry Expressway, according to a statement released to newsmen on Sunday by the Corporation’s Director Public Affairs, Shina Odunuga.

He explained that the government’s effort towards promoting sustainability of roads statewide necessitated the call, and that sustaining roads without a functional drainage system remains an herculean task.

Speaking against the backdrop of the volume of refuse cleared during the palliative works from the drains along the Mile 2 section and the attendant impact on the dilapidated state of the road, Adeyoye who visited the site in the company of the Special Adviser to the Governor on Drainage, Mr Joe Igbokwe, called for attitudinal change by residents.

“A road is as good as its drains and dumping refuse inside drains does not only compromise the integrity of the asphaltic surface, it also undermines the durability of the roads especially now that the rains are here; without a functional drainage system, the roads provided cannot be sustained”, the statement read.

She enjoined residents to augment government’s effort by ensuring that the cost and effort associated with providing, rehabilitating and maintaining roads is reduced to the barest minimum.

“Now that a palliative is being provided, it is also important to address the root cause of the state of the roads by changing our habits.

“By changing our habits, our roads will last longer and by refraining from indiscriminate dumping of refuse into the drains will prevent flooding and the attendant bad roads.

“When drains are provided for roads they are not meant for solid waste disposal, rather they are pathways for water to run. When the drainages are choked and the cross culverts are blocked, the asphalt surface will become water logged thereby accelerating the rate of dilapidation of the roads.” the statement quoted her as saying.

Bayern Munich wades off suitors for Thiago, Alaba, others