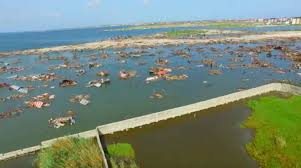 In a bid to end incessant gridlocks in Lagos State, the government has commenced clean up of State’s waterways to offer commuters alternatives to road transportation system in the state.

The State Government noted that Lagos’ teeming population of fishermen and others who made a living off the waters of the State, had suffered drastic reduction in earnings, all as result of waterway pollution.

According to Sanwo-Olu, the act of disposing waste on waterways further constituted harm to environment, economy and health of Lagosians.

The governor, who was represented by Commissioner for Transportation, Dr Frederic Oladeinde, said his administration would employ water transportation as a way to unlock traffic gridlocks across the State and make Lagosians more productive.

He reiterated that for government’s move to be successful, Lagosians also needed to adhere to campaign rules by employing proper waste disposal methods in line with State laid down procedures.

Sanwo-Olu affirmed that first phase of the campaign will cover 15km of city beaches, which included, East Senatorial District between Victoria Island and Lekki, 15km between Lagos Island and Ikate, and 4.8 drainage channel outfalls in the district, and urged all relevant agencies in the sector to make sure that the campaign was successful.

“This initiative is a laudable one, but all hands need to be on deck to ensure its overall success. I, therefore, urge all agencies of government to join hands to make this work.

“Through this, we will finally put an end to the problem of traffic gridlock that has so disrupted our beloved State for so many years now. We believe that it is achievable, and our faith is in you”.

In his response, LASWA General Manager, Damilola Emmanuel, urged residents of Lagos to recognize that government effort alone, could not solve issues of water pollution in the State, but that collective effort of residents and stakeholders was also important.

While emphasizing need for public sensitization and education to ensure safe and clean environment, Emmanuel said that it would ensure consistency in keeping Lagos waterways, as well as all areas of the State, clean and safe for Lagosians.

He explained that research would be conducted by LASWA to determine sources, composition and estimate of marine litters and debris, and that its findings would be submitted to the State government and form a basis for its continued operation in the State.

“The problem is no longer the issue, proffering solutions to this never-ending critical challenge is the main cause of concern so the reason we are here today to form a synergy towards solving this perennial issue affecting our aquatic resource and hindering the development of our waterways”.

“It is on this note I would like to appreciate all our partners and collaborators, The Food and Beverages Recycling Alliance (FIBRA) and I love My Lagoon. We also acknowledge the support of our sister agency, the Lagos State Waste Management Authority, LAWMA, the Lagos State Safety Commission, Lagferry, the Temple management company and all other stakeholder too numerous to mention”.