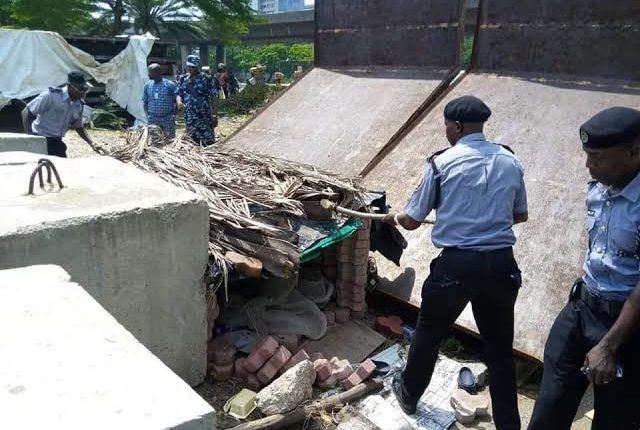 Share
By Olawale Abdul-Fatah
Atleast 15 traders and commercial vehicle operators have been arrested by Lagos State Government for allegedly violating the state environmental laws.
Aside those arrested, atleast eight vehicles and commercial motorcycle popularly called Okada, were also impounded on the stretch of Outer Marina by the State enforcement team.
They were arrested as the State Government commenced beautification of Outer Marina, to improve the aesthetical appearance of the area.
Speaking on the Flagging off  of the beautification process on Tuesday, Commissioner for the Environment and Water Resources, Tunji Bello, said those arrested were people who ignored the vacation directive of the state Government to all street traders and operators of commercial vehicles in the areas.
He added that all those arrested have been handed over to the appropriate enforcement agencies for prosecution, just as the present administration is committed to given the Outer Marina a major facelift to restore its greenery outlook and  to meet up the smart city vision of the state.
Bello said the project has started in earnest under the supervision of the State Parks and Garden Agency (LASPARK) as all the illegal structures dotting the areas have been dismantled and that traffic is now moving freely in the Outer Marina area and is a pointer to the determination to make life easy for every resident of the state.
The Commissioner reiterated that evacuation and enforcement activities were carried out earlier at the Outer Marina stretch Apongbon, CMS up to the State House Marina following the deadline of the marching order issued to street traders, shanties, squatters and Commercial Vehicles around the area.
According to him, “commercial vehicle operators in Marina should desist from dropping passengers or stopping at the foot of the bridge rather  they should do such at designated Parks in the area; also street traders seen around the area engaging in any commercial activities will be prosecuted as well as miscreants and all those found loitering around the foot of the bridge will prosecuted as well”.
Bello emphasised that as the beatification and Landscaping project had commenced, lagosians should be rest assured that the activities is a continuous process and will definitely extend  to other part of the state, charging residents of Marina and its environs to be ready to take ownership of the site after the beatification exercise and to desist from any act of indiscriminate dumping of refuse but rather patronize registered PSP operators in their area.