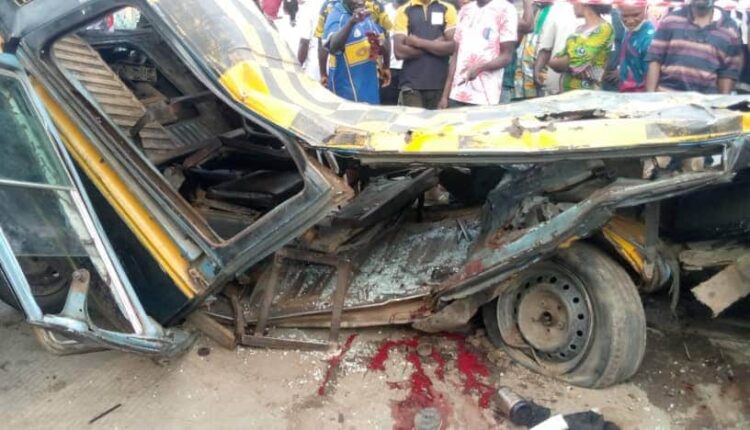 The Lagos State Government has assured families of deceased victims, Chidinma Ajoku, 27, and Chima Nnaekpe 29, killed by a fallen container of a truck at Ilasamaja area of the state that the truck driver and owner would be arrested and prosecuted.

It explained that the state would stop at nothing at getting justice for the families over the unfortunate incident, and their arrest and subsequent prosecution would serve as deterrent to other reckless drivers in the state.

The state’s Attorney General and Commissioner of Justice, Moyosore Onigbanjo (SAN), said that the state government’s had begun the process aimed at mitigating avoidable loss of lives to truck accident and that it would deployed all its asset towards getting justice for the bereaved families.

Speaking when he paid condolence visits to the families of the two deceased victims, the commissioner who described the incident as unfortunate, revealed that Governor Babajide Sanwo-Olu has directed the Commissioner of Police to commence investigation into the incident.

He disclosed that as part of the government’s commitment to ensure justice is served, he would personally handled prosecution of the case and ensure that the death of Chidinma and her colleague Chima are not in vain.

“The two accused persons pleaded guilty to the charge and were awarded a fine of one hundred thousand naira each by the presiding Magistrate,” the statement read.

“Be rest assured that Justice will be served and the perpetrators would be brought to book. We deeply sympathize with you on your great lose, we pray the Almighty God grant you strength and console you at this trying times. Be assured that my team and I will be leading the prosecution of this case before the court and ensure that Justice is served appropriately “.

“Governor Sanwo-Olu is deeply sad about the incidence and we have resolved that enough is enough, we will not allow reckless drivers on the road to continue to take innocent lives in Lagos State,” he said.

While assuring the victims’ families of the state government support, the Attorney General promised to brief the families at every stage of the investigation and prosecution process.

Responding to the visit, Chidinma’s mother,  Ajoku expressed gratitude to the state government on the condolence visit, saying she was overwhelmed by the good gesture.

Ajoku, who further expressed her fear for the lives of other citizens on the roads, pleaded with the Governor to step in, by enforcing the laws against reckless driving on the road.

“The killer of my daughter needs to be prosecuted to serve as deterrent to other reckless drivers on Lagos roads,” she added

On his part, Chima’s father, Onyekwere Nnaekpe, appreciated Governor Sanwo-Olu’s show of concern, implored the government to hasten the formulation of stiffer penalties for reckless driving of trucks and trailers to guard against future occurrence of such incident.

Late Chidinma and Chima were staff of the Federal Airport Authority of Nigeria, FAAN. The duo boarded a commercial bus from Airport road to Mile two after the close of work on July 26. It was gathered that the commercial bus driver had stopped at Ilasa bus-stop to either pick passengers when a 20ft container fell off a moving truck and landed on the commercial vehicle.