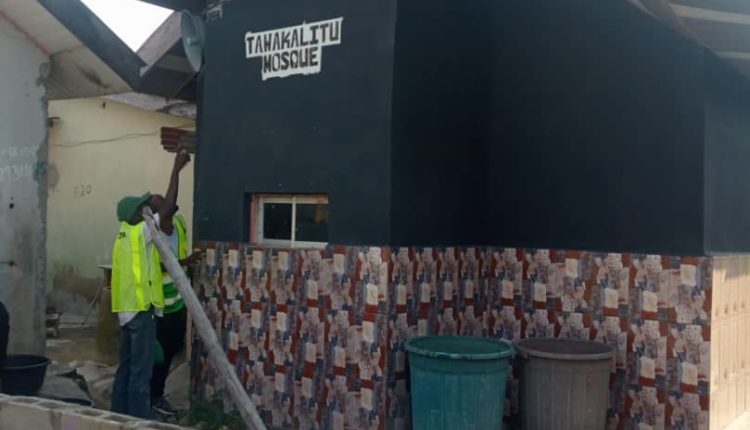 Lagos State Environmental Protection Agency, (LASEPA) has sealed no fewer than eight mosques, churches over persistent environmental pollution and disruption of peaceful co-existence of residents of the State.

Some of the churches and Mosques were Redeem Christian Church of God, RCCG at 68, Old Ota road, Orile Agege, Tawakalitu mosque and Jesus Answer prayer church.

The closure, The Guild gathered, coincided with the State Government celebration of the 2019 United Nations International Day of Tolerance held over the weekend.

Following the clamp down exercise of these religious outlets, being part of the routine enforcement drive by LASEPA, the General Manager of the Agency, Dr Dolapo Fasawe, stressed that the state zero tolerance for pollution especially noise.

According to her, there is no hiding place for any religious organization that cannot operate within the ambit of the law, regardless of their faith inclinations.

Fasawe explained that for the facilities to be reopened, the leaders of these organisations must reach an agreement of compliance with the Agency and also satisfy other necessary conditions as may be prescribed by LASEPA.

She further warned ownership and management of sealed off properties to desist from unsealing same behind the government as serious consequences awaited  such unlawful act..

The General Manager argued that mutual respect of views, culture and religion which the annual Tolerance Day celebration symbolizes across the world must be adhered to by all residents of the State especially religious organisations who are supposed to be the bastion of good conduct, tolerance, brotherliness and godly neighborliness.

Fasawe assured residents of the State that LASEPA will not rest on its oars in bequeathing a livable ambience to all inhabitants of the State, stressing that those recalcitrant organisations or worship centres known to be disturbing the peace of Lagosians would face the full wrath of the law.

She maintained that in as much as the State Government is positively disposed to the peaceful conduct of religion of choice by its citizens, it does not condone infringements on the rights of other residents of the State in the name of religious activities.

Recalling the inundating petitions and outcry from residents of the State over the insensitivity and intolerance of some religious outlets in different areas across the State, the LASEPA boss regrettably noted that several warnings issued to the management of these churches and mosques had not yielded the expected result.

“The State government recognizes the fact that the State thrives on peaceful co-existence among practitioners of the major religions across the State, but of great concern to the State Government is the need for religious activities to be conducted in a manner that worshippers and citizens would not infringe on each other’s rights,” the General Manager reiterated.

According to the LASEPA GM, the illegal and unauthorized conversion of residential properties for religious use without recourse to the wellbeing of other residents and the state of the environment is of great concern to the present administration under the Governor, Babajide Olusola Sanwo-Olu.