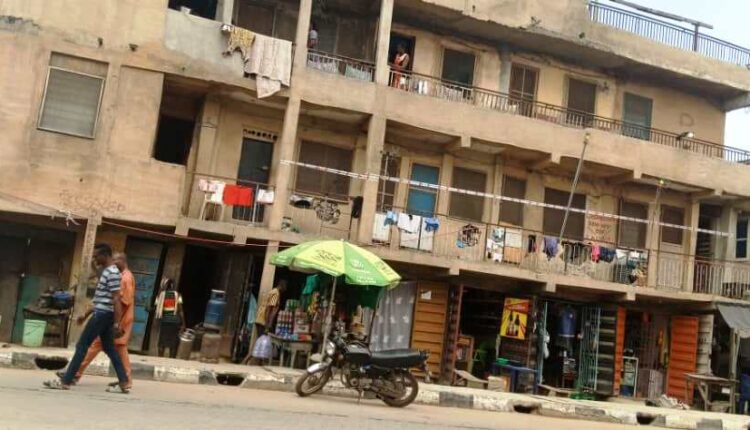 Community residents within Bariga axis of Lagos have begun to express concerns that a two-storey building with visible distress on 80 Odunsi Street has been left standing by the State Government agency, considering the danger that awaits both the occupants and the community if allowed to cave in itself.

The concerns of the residents were that the buildings that were not as distressed as the structure sited along the community’s canal have been pulled down to avert disaster but the unpainted distressed building on Odunsi Street has been allowed to remain standing with all rooms occupied after being marked.

While urging the government to come to the rescue of the community and avert it from unforeseen circumstances, the residents indicated that the persistent downpour recorded across the state including the community could fast-track the disaster they were afraid of.

The residents, meanwhile, wonder if the government that had prided itself as determined to end the spate of collapsed buildings was truly committed and should have brought down the structure through its Building Control Agency (LASBCA) after marking it as distressed.

As gathered, inspite of being distressed, the landlord (name withheld), who was said to be an influential individual within the community and a politician, had subsequently added a penthouse to it, apparently not bothered about the structure’s strength.

When The Guild visited the community on learning of the structure’s condition during the downpour experienced across the state on Sunday, a major part of the building, particularly the side closer to the community canal showed reasons the building was already marked distressed.

The tenants on the second floor, not minding the building status, were seen to have placed their entire big generator on their balcony, a style which building experts had often urged Lagosians to discontinue.

The front view of the building accessible through the recently constructed Odunsi road was different boldly written inscriptions from LASBCA officials warning that the structure was distressed and could collapse.

Inspite of the distress coupled with the government warning, the landlord and occupants were seen not to be bothered by its situation and the danger posed by the building to lives and property.

The shops on the ground floor, during our correspondent’s visit, were still carrying out their commercial activities without considering the red tape on the building alerting them of the danger ahead.

Rather, the owner, in a bid to coverup the status of the building, the owner, according to residents, embarked on a renovation exercise of the front

view, which portrayed the building as stable.

One of the residents told The Guild that the building had shown signs of distress and that it would be better if the government intervene by directing occupants of the building to immediately vacate the place as well as the owner before they put the community in trouble.

He noted that occupants of the building had refused to voluntarily vacate the property and that the entire community is worried that the building, should it collapse, could expose the community to a tragedy.

For a man, who shares same street with the distressed building, the dilapidated structure is life-threatening and the government needs to rescue their community from self-suicide by the occupants who had refused to vacate the place.

“We implore all the authorities that are involved in this kind of situation to please do something before things get out of hands”, he pleaded.

When our correspondent approached traders occupying the shops on the ground floor to know the location and phone number of the landlord declined, asking for reasons and when the reporter indicated his reasons, they claimed that the building was stable.

They faulted the marking and other actions carried out by the government, claiming that the building was stable and was not showing any sign of distress.

According to them, the building foundation and the pillars were stable and all indices the government officials were laying claim to were far from the truth and should be disregarded.

Meanwhile, efforts to get the officials at the Lagos State Ministry of Physical Planning and Urban Development have proved abortive, as no one was ready to speak on the building.

A staff at the ministry who spoke anonymously told The Guild that the owner is a politician and efforts by the ministry and LASBCA officials to let him see reasons for the building status have not yielded any result.