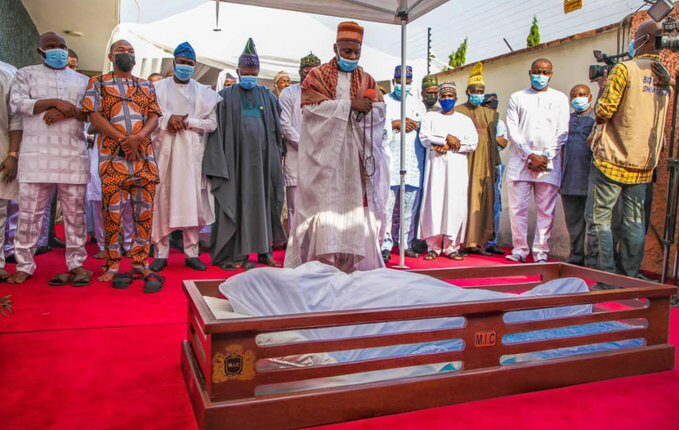 After completing his fruitful stay on this side of existentialism and etched his name in heart of millions across Nigeria, the first Executive Governor of Lagos, Lateef Jakande, was again honoured in death as top politicians joined family members, other well-wishers to commit his remains to mother earth.

After completing the prayers, the remains of Jakande, who was regarded as one of the best public office holders in the political history of Nigeria based on how he transformed Lagos State and Nigeria during his tenure as Minister of Works, was conveyed for the last time for his burial rites and interment at Volts and Gardens in Ikoyi.

At late former governor’s resident in Lagos, a sea of party faithfuls, neighbours and community members visiting the deceased’s widow and children to commiserate with them, recounted the good times they shared together and how the former governor’s insight laid the foundation for the prosperous Lagos which is now home to all and sundry.

During the burial rites on Friday, mourners were seen sobbing while others joyfully tell tales of his developmental exploits when the deceased held sway as the Lagos state governor amid eulogies that kept pouring in for the man fondly called ‘Baba kekere’.

Jakande was laid to rest a few minutes to 6 pm after the Muslim burial rites prayers led by the Chief Imam of Lagos, Sulaimon Abou-Nolla. The remains of the late former governor, accompanied to the cemetery with the staff of office of the Oba of Lagos, Rilwan Akiolu, and several religious leaders, was brought into the Vaults and Gardens Ikoyi at 5:19 pm.

Leading the league of eulogies, President Muhammadu Buhari said that Jakande lived for the good of others, state and country, and his legacy of standing for all that was right for humanity would be long remembered.

According to him, the former governor imprint on the commercial nerve centre of the country, Lagos State, which was the former National capital, will continue to awe and inspire, reminding everyone of the strength of character and sacrifices of the visionary leader.

Buahri, through a statement by his spokesperson, Femi Adesina, said that the deceased contributed immensely to the growth of democracy and good governance in the country, describing him as a patriot, whose wisdom will run through generations, especially in putting people first in development plans.

Sanwo-Olu recalled that Jakande, popularly referred to as ‘Baba Kekere’, brought a lot of development to Lagos te as governor between October 1,1979 and December 31, 1983 in line with the five cardinal programmes of the Unity Party of Nigeria (UPN), founded by the late sage and former Premier of the Western Region, Chief Obafemi Awolowo

Through a statement signed by his Chief Press Secretary, Gboyega Akosile, the governor said described the former Minister of Works as an epitome of honesty, dedication and selflessness, who used his elevated positions for the betterment of the people he served.

According to him, Jakande is one of the few Lagosians and Nigerian leaders that demystified politics by bringing governance closer to the people.

He said that the deceased left with impeccable records in Lagos State and that is why he remains till date, a reference point for governors in Lagos and other parts of the country.

“On behalf of the Government and people of Lagos State, I want to express my sincere and heartfelt condolences to the family, friends and associates of the late Alhaji Lateef Jakande as well as members of the progressive community.

“No doubt, the death of Alhaji Jakande is a colossal loss to Lagos State and Nigeria. He made lots of positive impact and contribution during his lifetime to the growth of our dear State by introducing housing and educational programmes that targeted the poor, building new neighbourhood primary and secondary schools and providing free education for all.

“Baba Jakande within his four years in office established the Lagos State University. His government constructed over 30,000 housing units, which were of great value to the masses. Having distinguished himself as ‘Action Governor’, Alhaji Jakande was appointed Minister of Works in 1993 where he replicated his developmental programmes, by building thousands of housing units in different parts of Nigeria as Federal Low-Cost Housing Estates.

On his part, Oyetola, who sent heartfelt condolences to the government and the people of Lagos State described the deceased as a professional and respected journalist, progressive politician, distinguished public servant and an outstanding leader, who demonstrated strong concern and commitment to the welfare of the people he served.

Through a condolence message contained in a statement by his Chief Press Secretary, Ismail Omipidan, Oyetola said that Jakande brought significant development to the State and left remarkable legacies that made him a reference point for politicians, not only in Lagos but across the country during his reign.

“On behalf of the Government and good people of the State of Osun, I extend my heartfelt condolences to Governor Babajide Sanwo-Olu, government and people of Lagos State over the death of the first civilian governor of the State, Alhaji Lateef Jakande.

“I also commiserate with the family of Baba Jakande, his friends, associates, and all those who mourn the demise of the elder statesman and administrator of note. When he served as governor of Lagos State between 1979 and 1983, Baba Jakande brought significant development to the State and left remarkable legacies that made him a reference point for politicians, not only in Lagos but across the country.

“With his focus and people-centric leadership, Baba earned the trust and respect of the people of Lagos and Nigerians from diverse political, social, and religious leanings. He will be long remembered for his legacies and impacts. I pray that Almighty Allah will forgive his shortcomings, grant him a place in Aljanah Firdaus and grant his family and loved ones the strength to bear his demise,” the statement said.