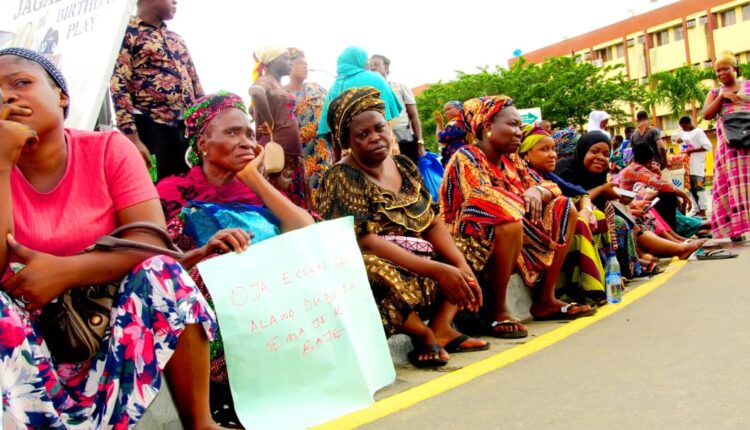 Dozens of traders evicted from Apongbon market, after the bridge was gutted, have taken to streets, appealing to the Federal and Lagos State Governments to shelve plans of displacing and demolish shops erected at their new location on Lagos Island.

The traders said that displacing them from their new site would further put them in a difficult condition after goods worth millions of naira were destroyed during the fire disaster that gutted over 500 shops sited under the bridge.

They lamented that any decision to displace them from their new location could further cut their source of income and put everyone of them in additional debt which they may not be offset easily when evicted from their new site.

The traders, who assembled for a peaceful protest on Thursday at entrance of the Lagos House, Ikeja, said that after the fire incident at the market , it has been difficult for them to continue their trade effectively as they do not have any other alternative place than their present location.

In their unanimous voice, they lamented that after they had evacuated the market, they had to move to a loop nearby to continue their business in order to cater for their family but they were also driven away by some law enforcement personnel.

Appealing to the Lagos State Governor,  Babajide Sanwo-Olu, they requested that they should be allowed to remain in their new location, continue trading and source funds for their daily needs.

The traders appealed to both governments particularly the Minister of Works and Housing, Babatunde Fashola, that they should be allowed to continue their businesses without any hitches.

During the protest, one of the  protesters, Iyabo Deborah, said that the Iyaloja General, Folashade Tinubu-Ojo, gave her approval for their protest, as well as the governor, who had earlier been sent a letter as regards their demonstration.

According to her, the law and enforcement personnel who chased them out from under the bridge which they were managing had threatened to return next week Monday to evacuate them from where they are.

However, as of the time the Guild correspondent was on stand, neither the governor or his deputy nor any representative of the state house came out to attend to the lamenting protesters at the gate.

As gathered,  the fire outbreak which razed the Apongbon market was said to have claimed over 500 shops which caused panic among road users and motorists around the area,  as well as  causing a gridlock on the Eko and Carter Bridge of  Lagos.

Also, many shops which were said to have been majorly constructed with planks were destroyed in the fire, including, vehicles which were parked under the bridge.