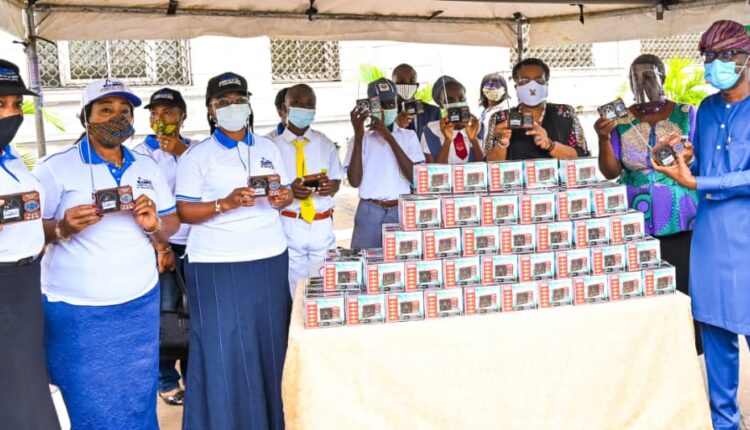 As part of its commitment to improving the education sector, the Lagos State Government has disclosed that plans are being concluded to establish a radio station dedicated for education programmes for students and pupils in the state.

It explained that the project had become imperative to improve students and pupils experience and access to educational contents amid the coronavirus outbreak which necessitated the closure of schools across the state.

This is coming as the Lagos State Governor, Babajide Sanwo-Olu also unveiled 5,000 transistor radios, 5,000 face masks and cash donation by the Committee of Wives of Lagos State Officials (COWLSO) aimed at improving access to educational contents by pupils and students in the state in response to the challenges occasioned by the global pandemic.

Speaking at the event, which was held at State House, Marina, on Monday, Sanwo-Olu commended COWLSO for the initiative in improving the education of children across the state, adding that the initiative would enhance access to educational contents on radio.

According to him, since schools are physically not operating, the donation would help students to be abreast of all of the things happening concerning their education.

“What COWLSO is donating this morning is to improve and enhance the learning capability of the children and so we are excited that they have been able to put this together for the students.

“I understand that this is the first batch, others will come in. This is a new norm and so we need to adapt to the new realities of where we found ourselves and so this is part of adaptability and innovation has to come to learning.

“What we are doing now is as much as possible, learning can be done offsite and so it is just something to make our children get themselves busy, have a tool, have an app, have a phone and have a radio and whatever it means to communicate such that at the agreed time and in the comfort of their learning environment, they can tune in, they can listen, they can take notes, they can interact and be in tune,” the Governor said.

He added that the transistor radios and face masks, which were donated by COWLSO in partnership with the Office of Lagos State First Lady to the Ministry of Education, would be distributed across the state, especially in the hard-to-reach areas including riverine areas.

On the proposed education radio station, the Commissioner for Education, Folasade Adefisayo, said the Ministry was working on establishing a station that would be solely dedicated to education.

According to her, the radio station was part of the government’s effort to expand time for airing of educational contents and improve access for students and pupils in the state.

She commended the First Lady and COWLSO members for the donations, saying the initiative would perfectly key into efforts to improve access to education for pupils and students considering that some radio stations have signed on to the learning programmes initiated by the Ministry to engage students throughout the pandemic period.

On her part, the First Lady and COWLSO Chairman, Dr Ibijoke Sanwo-Olu said the donations were to augment the government efforts in ensuring that no child is left behind in the access to quality education in the state, adding that the 5,000 face masks and cash donation would help mitigate the burden of parents, guardians and students.

She said statistics confirmed that there are over a million children at home during this pandemic period not going to school for the past three months, while students preparing for WAEC and Jamb exams had equally been affected.

“In this new normal, Ministry of Education has gone ahead to improve on e-learning, loading the Nigerian curriculum on to some platforms and in a bid to reach out to more students in the rural and riverine areas numbering about 200,000 across Lagos State in the primary and Secondary schools in Ibeju Lekki, Epe, Ikorodu, Badagry, Agege, among others, COWLSO is coming on board to assist with transistor radios so that our students will have access to educational programmes on radio.

“During the first phase of the lockdown, COWLSO took part in distributing palliatives. We distributed food items, hand sanitizers and everything that needed to be distributed. However, we were still worried about the education of our children now that they are not going to school.

“We just don’t want to stop at giving palliatives; we wanted to move further and so we decided to donate radio transistors with batteries to ease the leaning of the children since we learnt that the Ministry of Education had perfected partnership with some radio stations,” the First Lady said.