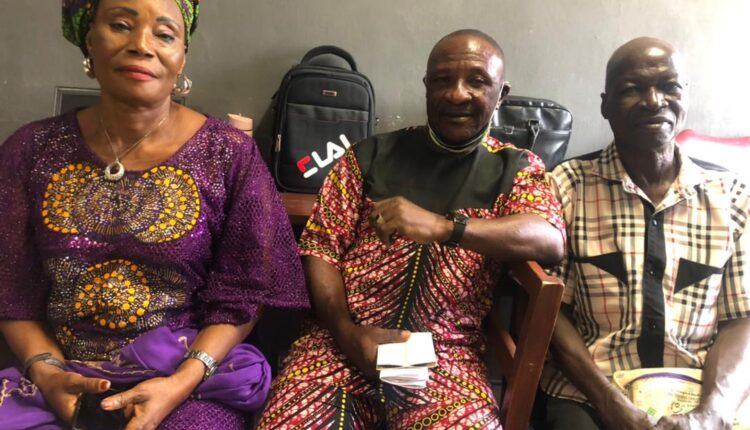 A group of retirees from Lagos Television, LTV, Radio Lagos and Eko FM have pleaded to the Lagos State governor, Babajide Sanwo-Olu, to not let them die of hunger, particularly during Christmas and to be able to make their families happy by looking into their terminal benefits and pension that have not been paid since 2017 they dropped pen from their respective organizations after 35 years of service.

The 55 members from the retiree group, who gathered at the LTV premises earlier on Tuesday said that it will be a good gesture on the side o the gov if he looks into their situation and come to their rescue by approving their pension paper which is before his table, so as to put smiles on their faces during the season of happiness.

The retirees stated that none of their benefits have been released by the government they served through the three media organizations.

According the affected former staff of the three outfits, all the those that retired from the organizations between 2017 till date were yet to receive benefits for the services rendered for over 35 years.

The affected retirees stated that the withheld funds has made it difficult for them to survive under the current economic reality, particularly to foot the bills for their medical check up.

As gathered, some of the former staff of media outlets were said to be battling with terminal ailment which has affected their day to day activities.

It was learnt that 15 of the 110 affected retirees have passed on while waiting for the government to approve the payment of their benefits which they said the current administration had promised to release before the yuletide season.

Speaking on behalf of the former staff, Olusegun Onafowokan, who narrated the ordeal of his fellow retirees waiting for the release of their pension, said that all they were requesting for is release of their benefits.

During an interview with The Guild at its office in Ikeja, Onafowokan noted that he worked for 35 years in LTV and rose through the ranks from a junior staff before his retirement, saying I worked diligently daily to ensure the media outfit serve the public as expected.

“And since my retirement, I have not received any money from the office I once worked tireless for.  I have resorted to begging friends, sibling to have daily meals because of the situation. I have children in the university and I’m leaving in a rented apartment. My situation is not different from 110 retirees because we are all under one umbrella. 15 of my colleagues have died in the struggle while those that are still alive have several health issue ranging from eyes to legs, blood pressure among others.” he said.

Onafowokan claimed that those of them who are still able to go and press buttons are more or less like a walking corpse that can drop dead if the situation persist.

Another affected retiree under anonymity condition during their visit to The Guild office, disclosed that since 2018 she retired from LTV, things have been very tough with her due to the failure of the management of LTV to pay her benefits as at when due.

She lamented that it was unfair on the side of the government and management of LTV to continue looking away after working for the station for 35 years and allow them to die one after the other as a result of non payment of terminal benefit, gratuity and pension that were supposed to be paid to the beneficiaries.

According to her, the retirees since 2017 have not received their pension from LTV and they have taken their problem before the government, met with pension commission and commissioner of establishment on the matter but yet nothing has been done to erase the wrong.

“Christmas is coming , I don’t know how to survive but because the commissioner of establishment promised us that the Governor will do something before Christmas and we are hoping.” she said.

Currently, the situation is not showing that the state government has anything to put on the table of the retirees and their families especially during this yuletide period.

Also, speaking to The Guild correspondent, a  former producer at the LTV,  Gbenga Olowo expressed his grievances over the unpaid pension, adding that it has not been easy trying to survive because of the family he has to fend for.

“I retired in February 2018. I was formally in Radio Lagos but was transferred to Alausa under Ministry of Information where i retired. When i was in Radio Lagos, I was there as a producer but after my retirement for four years now, I have not received any pension from the government. I have a family that depend on me and it has not been easy because no income has been given.” he said. 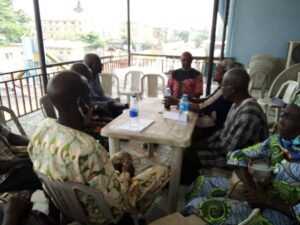 In the same vein, Ogunje Olaniyi stated that: “I was working with LTV before I was transferred to Alausa where I retired in 2017. it is disheartening that til now, the government have not been able to pay our pension. The problem started from LTV, the management in charge then were not remitting our pension. at this age, we are not supposed to be suffering. I just want them to know that whatever you sow on earth is what you will reap. The government should attend to us because they are making us suffer. If it was only me, it would have been better but I have a wife and children to cater for.”

Also, a  former cleaner who had worked with LTV lamented her ordeal bitterly about the unpaid pension as she calls on the government to come to their aid, adding that she has been battling with a constant eye defect but have been unable to go for treatment due to lack of funds.

“I have eye problem but i can’t find money to treat myself because there is no pension as we have been expecting. I’m pleading with the government to come to my aid. They should not allow me to die. I don’t have anyone to cater for me. My children do not have a job yet. I’m just suffering.” she said.

In addition, a former security guard, Bolaji Jimoh, counted his lot . According to him, “I retired as a security guard in 2020 and since then, I have not been able to see any money from the pension. I’ve struggling with my eyes to see because of it’s problem and there’s no money to treat myself. I even tried to go into farming but my strength has failed me.”

Another retiree who asked to be anonymous said that she has been struggling to survive because her husband is also a retiree and there is no source of living to meet their basic needs at the moment.