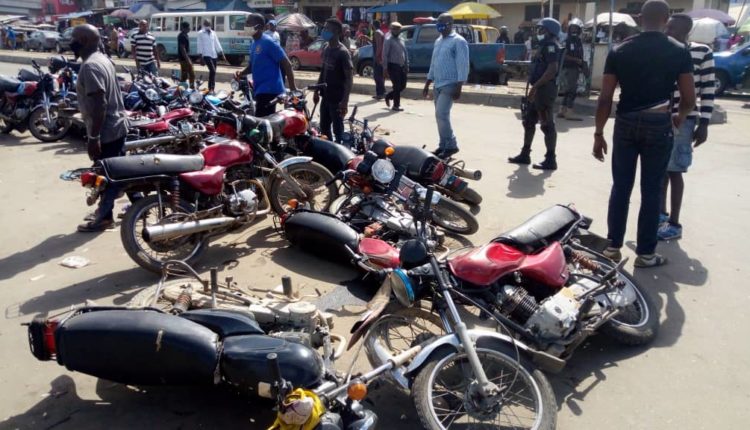 In a bid to ensure sanity on Lagos roads, the State Environmental and Special Offences Agency (Taskforce) has impounded at least 180 commercial motorcycles popularly called Okada riders found contravening the road traffic law in the state.

The 180 motorcycles were picked by the enforcement team while plying Lagos Abeokuta expressway and roads in Ikeja and Oshodi-Isolo Local Governments to protect residents from persistent cases of road crashes.

As gathered, the impounded motorcycles were said to have been conveyed from their locations by four trucks to the task force headquarters in Oshodi where they will be kept for onward crushing.

Aside from the okadas, scores of riders were also said to have been arrested during the enforcement after they allegedly challenged the taskforce personnel for impounding their motorcycles.

A source from the taskforce disclosed that the actions of the riders were at variance with the ban imposed on their activities by the State Government to prevent loss of lives and curtail further spread of coronavirus in Lagos.

Confirming the enforcement, the task force chairman, Olayinka Egbeyemi, stated that the impounded okadas were found contravening the laws in the state.

Egbeyemi, however, warned okada riders in other communities to desist from contravening the ban imposed on their activities by the government and that the taskforce would not hesitate to impound any motorcycle found during enforcement.