Lockdown enforcement will not be relax during Easter… 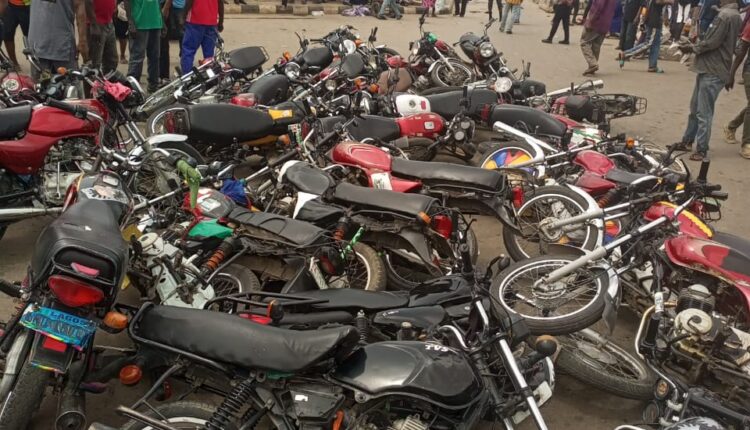 Share
Following the gruesome murder of a sound engineer, David Imoh by some commercial motorcyclists popularly known as Okada around Lekki axis, the Lagos State Taskforce has arrested no fewer than 10 riders suspected to have participated in the actions that resulted in the death of the sound engineer.

Aside from the 10 suspects arrested, the Taskforce has seized at least 123 bikes for contravening the traffic law including plying the Lekki Epe Expressway, Lekki Phase 1 axis, a route that was prohibited by law.

Confirming the number of persons arrested, the Chairman of the Lagos State Taskforce, CSP Shola Jejeloye, who led a team of officers and men to the axis to carry out a raid on commercial motorcyclists operating unlawfully, had carried out a series of raids and seizures along the Lekki axis in the past.
According to him, unfortunately, the operators of commercial motorcycles have refused to turn over a new leaf thus causing mayhem in the State which resultant effect is worrisome.
Jejeloye further stated that the Agency has been to this area severally to make arrests and seize some of the bikes plying oneway and restricted routes, but unfortunately, these Okada operators are found back on the same roads the following week. Some even put up resistance when apprehended because they see nothing wrong in what they are doing.
“The murder of David by the suspected Okada men is a painful and tragic incident, hence the need to intensify our activities in the axis and in the State to ensure that the menace of Okada is brought to a complete halt and also prevent a reoccurrence of such an inhumane and barbaric act” He stated.
The Chairman also charged his men to be proactive as operation Kogberegbe is still in force and will be intensified within the metropolis in the coming days.
“Operation Kogberegbe which was launched as a result of the menace of Okada operators will be reinforced in order to put an end to the nuisance caused by them. No stone will be left unturned this time in ensuring Lagosians are not intimidated while commuting in any part of the State. Enough is enough!”
Jejeloye emphasised that the menace of Okada in the City is a threat to the security architecture of the State as most of these Okada riders are non-Nigerians and have nothing at stake in case there is a breakdown of law and order.
He, therefore, enjoined all well-meaning Lagosians to know that the fight against the menace of Okada is a collaborative effort between the Government and the people. While the Government will continually enforce the law, the people should also assist the State in keeping Okada off the highways by refraining from patronizing them which will permanently keep them out of the illegal business.
The Chairman appealed to Lagosians not to be jittery as a result of the incident as the Agency is on top of its game in ensuring that any Okada operator found wanting will be made to face the wrath of the Law.
He urged them to go about their businesses freely and avoid any form of altercation with okada operators in order to prevent anyone from taking laws into his hands and carrying out an act that would be regretted later.