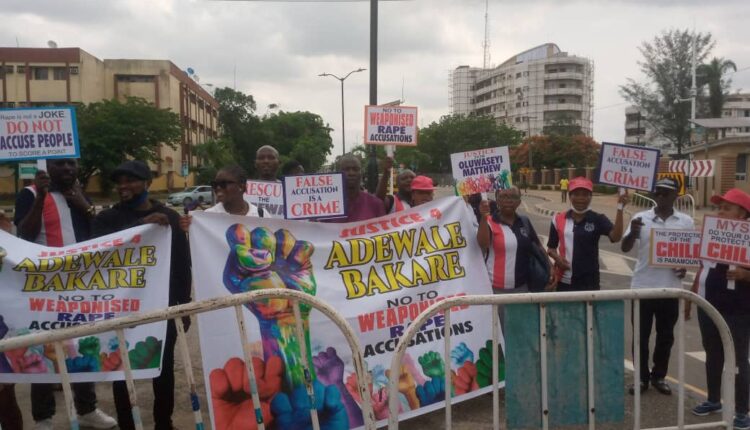 Dozens of teachers and schoolchildren from Methodist Girls High School Sabo, Yaba stormed the office of the Lagos State Governor, Babajide Sanwo-Olu, protesting over the arrest of a teacher, Adewale Bakare, who was alleged to have raped a nine years old student in the school.

They said that circumstances surrounding the alleged rape of the student were unclear and that intervention of the governor would be urgently needed in other for justice to prevail.

In their collective voice, they alleged that the father of the minor, Arewa Adebisi used a false mechanism to accuse about five innocent persons of defiling his daughters in 2019, and that demanded justice in the case.

They noted that sometime in 2019, a Non-Governmental Organization, Cece Foundation during an advocacy visit, had discovered that the minor was physically abused by the father in a report sent to the Ministry of Youths and Social Development.

According to them, it was shortly after the incident that Adebisi accused a driver, Abiodun Matthew of defiling his daughter and the accused had been sentenced to life imprisonment.

Meanwhile, they disclosed that Bakare is currently serving a term in Kirikiri prison based on the allegation that he defiled Arewa’s daughter even though the minor had confessed on different occasions that she had lied against Bakare.

During the protest at the Governor’s office, Ikeja, Lagos, on Friday, one of the protesters, Mary Adesoga, who is a counselor in the school, disclosed that the protest was aimed at seeking the governor’s intervention to check the injustice melted out to the innocent man and to clarify that Bakare is innocent of the accusation.

Adesoga noted that Bakare never knew the minor because he was the physical education teacher and that it was surprising when the accusation was leveled against him without any concrete evidence.

Also, a sister to one of the formerly accused teachers, Fawole Adejumoke, said that her brother, who was not identified, has been in prison since 2018 after the accusation.

“He has been there since 2018 after the accusation. Before my brother’s accusation, we heard that he had accused two other people in the school including his driver. Adewale Bakare is the fourth person he is accusing.

When my brother was accused, the name of the girl used was Adetutu but I’m surprised that the same girl’s name is now known as Adedoyin. He changed the name so that people would not notice but it is the same girl.” she said.

Meanwhile, a source from the government who spoke under anonymity conditions, disclosed that investigations is ongoing on the matter to unravel the circumstances around the case and dig out the truth for justice to prevail.