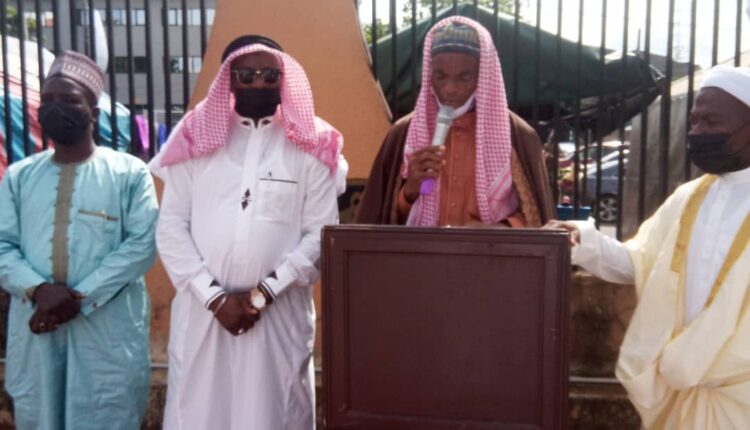 As Muslims celebrated Eid globally, marking the end of Ramadan fasting, the Lagos State Secretariat Mosque and clerics have underscored the need for Nigerians to sustain the togetherness, mutual cooperation, and others qualities imbibed during the holy month.

They added that Nigerians must uphold lessons learnt during the month of Ramadan and inculcate them into their daily activities including helping the needy across the country.

These appeals were made after performing the Eid prayers and took the challenges confronting the country before Almighty Allah for intervention yesterday in Ikeja.

Addressing pressmen, the mosque chairman, Dr. Tajudeen Afolabi, urged Nigerians particularly Muslims to sustain all religious activities carried out during the holy month and continuously live in peace and harmony.

He noted that the congregational prayers made during the month of Ramadan and other supplications carried out in the mosque were basically messages from Allah that further re-emphasized that everyone should live harmoniously.

Also, the Imam of the mosque, Abdulhakeem Abdulgafar, while delivering his sermon after the prayer, explained that the insecurity confronting the nation will ease immediately everyone decides to lives in peace and harmony.

Abdulgafar added that everyone, including Christians, fast during the month, which showed love, and cared for one another, saying, this indicated that we all, irrespective of our religion, can sustain what we did during the month of Ramadan.

He said: “Allah supports those living together, eat together, and do not separate because surely the blessings of Allah lie in togetherness. This is because togetherness and mutual cooperation bring prosperity to all. These create a bond of friendship and helpfulness to one another in times of need”.

Another cleric, Abdulbasit Baruwa, noted that the insecurity and other challenges confronting the country will reduce drastically when everyone sees the other person as his brother and not enemy.

Baruwa added: “During Ramadan, everyone considered the other person as a brother and cared for one another, even those that are not Muslims and that is what we want going forward.

“When any challenges arise, rather than apportion blames, we all should gather and address the issue. This is what will bring development and correct all the societal ills.