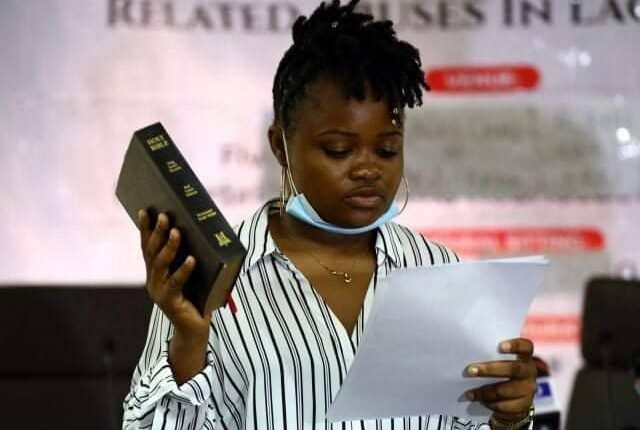 One of the youth representatives on the Lagos State Judicial Panel of Inquiry probing the alleged killing of EndSARS protesters by soldiers at the Lekki toll gate, Rinu Oduala, has stepped down from the panel ahead of the fresh protest slated for Saturday (tomorrow).

She indicated that the decision to recuse herself from the panel followed an alleged plot by the government aimed at ensuring every effort at getting justice for victims of the Lekki shootings of October 20, 2020 was frustrated.

Rinu noted that part of such alleged move was the decision of the panel to hand over the tollgate back to its operators, Lekki Concession Company, while it was yet to conclude its assignment and hand over its report to the appropriate authorities.

Through a piece released on her social media page on Friday, the youth representative argued that said that approval was granted to LCC when the state government and the company have not been cleared of collusion with elements allegedly deployed by the federal govt to shoo protesters during last year demonstrations.

According to her, justice has not been served, and as a representative of the Nigerian citizenry, my only recourse is to stay the course of justice.

Continuing, she said, “On 6th February 2021, we were ambushed with votes to reopen the toll gates. I participated because I do not believe in silence. It is clear where my loyalties lie.

“But at the end of the day, parties on the panel voted to reopen the toll, citing lost jobs as more important than justice for lost lives through a proceeding that didn’t form a proper quorum without the reps who represent the youth constituency that birthed the idea of the panel, and on whose mandates the panels were set up.

“Coupled with the undue intimidation of peaceful protesters, the cyberattacks accounts loyal to the government, and many more, I will be stepping down from the Lagos Judicial Panel as it is now obvious that the government is only out to use us for performative actions.

“We must not forget the purpose of this panel: to address injustice and create accountability for the SARS brutality and for the heinous events on 20th October 2020.

“When calls for justice are subsumed by commercial concerns and vested interests, it calls into question the legitimacy and integrity of the entire affair & the impartiality of the proceedings. Without a final panel report or actionable steps, we are returning to the status quo.”

Meanwhile, organizers of the fresh protest billed to hold tomorrow at the Lekki tollgate have insisted that they would not be deterred by warnings from the Federal Government against the demonstrations, saying the planned rally was beyond police brutality that forced thousand of Nigerians to storm the streets last October.

They added that despite several threats from security operatives and other groups planning counter-protests against the genuine agitations, the Nigerian youth was ready to demand justice and genuine closure on those who lost their lives at the same spot where the protest is billed to hold.

The organisers maintained that contrary to the position of the apex government that the youth was coming out to destroy and engineer renewed looting, killing, arson, and destruction of public and private properties, the fresh protest was aimed at demanding a Nigeria that works for all irrespective of religion, ethnic or political affiliations.