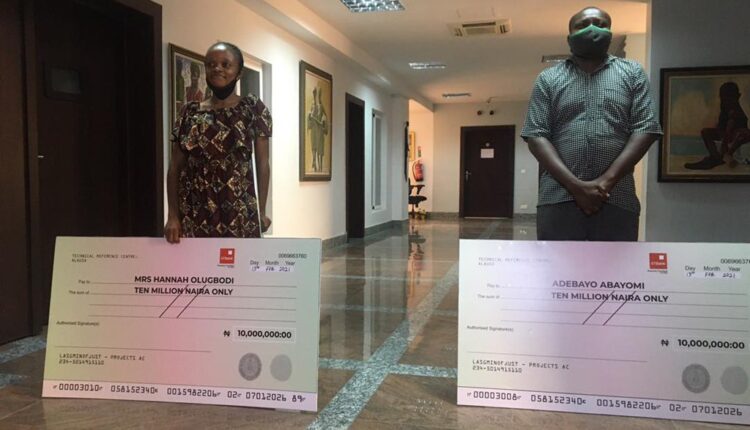 The path to genuine reconciliation and closure may have begun for victims of police brutality in Lagos State as the state’s Judicial Panel of Restitution and Inquiry set up to investigate cases of police brutality has awarded N20 million compensations to two petitioners in Lagos.

Based on the panel’s recommendation, two victims, Kudirat Obayomi and Hannah Olugbodi, who had earlier petitioned the panel, were awarded N10 million each on Friday.

While Olugbode was still alive to recount her ordeal at hands of the SARS operatives, Obayomi was not alive to tell her story as she was killed by a police stray bullet in April 2017.

However, Obayomi may not have died in vain as the panel also awarded scholarships for the children she left behind aside from the N10 million compensation to the deceased family.

The panel also recommended that a letter of apology be written to Obayomi’s family by the police while officers involved in her untimely death were recommended for prosecution.

Although Olugbode, a 35-year-old hairdresser, lives to tell her story, the incident changed her life completely as she has been on crutches after a stray bullet from SARS officers who were attempting to arrest a suspected fraudster with tattoos in June 2018 at the Ijeshatedo area of Lagos destroyed her left leg.

The panel while awarding her the N10 million noted that the compesation was approved for her treatment, the stress and anxiety she suffered since the time she was hit by the bullet to date.

Following the protest against police brutality last October that was later marred with violence, killings, arson, and destruction of property, the Lagos state government had set up the panel to investigate cases of police brutality especially those involving officers of the now-defunct Special Anti-Robbery Squad (SARS) and compensate victims accordingly.