Occupants of units of duplexes apartments on 4, Ayoola Coker street inside Ikeja Government Reserved Area (GRA), have written to President Muhammadu Buhari, on how women and children were allegedly humiliated recently by Ikeja Electric in an attempt to disconnect the buildings from power supply.

They claimed that their apartments were put under siege for a couple of hours after officials from Ikeja Electric stormed their premises with heavily armed mobile policemen, leaving innocent children and their mothers to run for safety.

The residents accused the company of deliberately subjecting them to suffering by putting their property in complete darkness for over 90 days and had to live on generators. 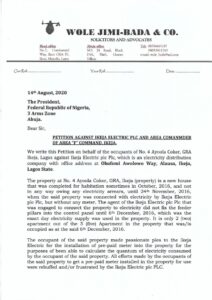 Through a petition obtained by The Guild recently from the residents’ Legal Counsel, Wole Jimi-Bada, they appealed to Buhari to intervene on the matter and use his good office to investigate conducts of the power distribution company, such that does not represent his government.

They narrated their experiences in the hands of the power distribution company and how they have paid over N9 million to the electricity firm within two years.

The petition said: “The action of the Ikeja Electric Plc, bringing armed policemen to a residential property to create terror on peace-loving citizens of Nigeria that are not owing Ikeja Electric, is very distasteful.

“The siege laid on the property and the violence displayed by the Ikeja Electric officials and the policemen put the whole residents in great apprehension of imminent danger, causing children who were playing outside and their mothers’ untold panic, leaving them totally traumatized.

“The premises has been thrown into utter darkness ever since and as a matter of fact it is Ikeja Electric Plc that owes the residents of No. 4 Ayoola Coker, GRA Ikeja, Lagos”.

According to the petition, the occupants of the said property have made series of complaint in respect to overcharge, in accordance with the normal procedure and the complaint remain unresolved but the Ikeja Electric still disconnected the electricity from the premises.

They also complained that all efforts to secure prepaid meters to each of the unit of duplexes were abortive and that company refused to comply to their requests and rather prefer to continue milking them through a post-paid metering system.

“The Ikeja Electric failed to notify the occupants of the said property either through writing or telephone that the electricity at premises will be disconnected”. 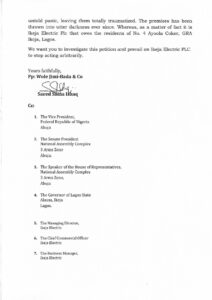 “The occupant of the said property had in June paid a sum of N1 million into Ikeja Electric account, been part payment for April, May and June meter reading estimated at N1.8 million and through the property owner, Dr. Dapo Animasaun, then residents also entered into payment arrangement with the Ikeja Electric priorn to the payment.

“Ikeja Electric reneged on the arrangement as agreed for reconciliation after payment, A bank draft of N1, 000, 000. 00 was subsequently made with a caveat of reconciliation before Ikeja Elecricity PLC takes custody but it instead disconnected the electricity at No. 4 Ayoola Coker, Ikeja GRA, Lagos.

“We want you to investigate this petition and prevail on Ikeja Electric PLC to stop acting arbitrarily,”