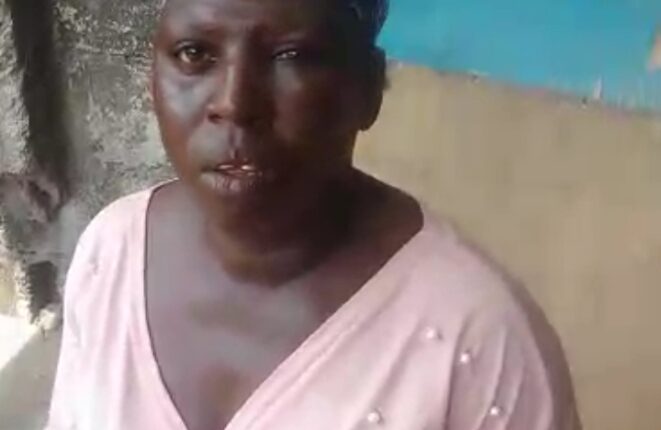 Swift interventions of Ebutte-Metta residents in Lagos Mainland Local Government, Lagos has prevented a woman, Omowunmi Afis, from allegedly killing his five-year-old daughter after she and the girl’s father, Azeez Afiz, separated over unresolved personal issues in the state.

It was learnt that Omowunmi had allegedly pushed her daughter, Ayomide, before an upcoming commercial motorcycle operator popularly called Keke Marwa, in order to serve as an alibi for her orchestrated plans for the child.

As gathered, the tricyclist, while trying to avoid killing the child, crushed her to the side of the road, before residents rushed towards the scene and rescued the child that had already sustained a heavy injury on her left leg and other minor injuries all over her body.

Omowunmi’s action yesterday, according to eyewitnesses that spoke to The Guild, attracted reactions from residents that were said to have swooped on the mother with punches and slaps to express their anger over the woman’s conduct on her only child.

Before yesterday’s action, Omowunmi was said to have been adopting different strategies to get rid of the child, Ayomide, but interventions of Willoughby street residents, who checkmate her from embarking on previous actions, had been the only hurdle standing before her and orchestrating the death of the child.

It was gathered that within the last seven days, the mother of the five-year-old girl had tried different strategies including trying to throw her in a well but the intervention of other occupants of the building stopped Omowunmi from embarking on the homicide.

A resident of the community, Olayinka Adewale, told our correspondent that the accident could have been averted if occupants of Araromi Hall were present outside, saying because they were not outside, it was easy for her to do that.

Adewale added that Omowunmi was seen by passers-by when she pushed her daughter into the path of the upcoming tricycle that hit the underage girl immediately.

He narrated that after the accident, Omowunmi abandoned the child before residents raced to the scene and rushed her to a hospital where she was treated and bills paid by residents of the community.

After the accident, residents said that the Rapid Response Squad (RRS) has been contacted to arrest the mother and take custody of Ayomide after she was discharged by the medical experts at a private hospital where she was rushed to.

Another resident, who did not want to disclose her name, told our correspondent that after Omowunmi realised that the police had been involved, she sneaked away from the scene.

According to her, the RRS has taken custody of the child in order to protect her from being killed by the mother who had allegedly been attempting to kill the child.

The Guild authoritatively gathered that the child was already in the custody of the Force and they have commenced investigations to ascertain reasons for the woman’s actions.