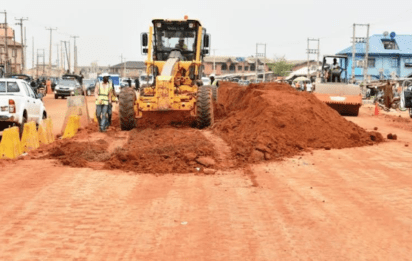 Residents of Amuwo-Odofin Local Government Area of Lagos State have appealed to the state government and the Department of Petroleum Resources (DPR) to put resources together and collaborate towards fixing the Marwa road.

They explained that the road, which remains a major artery in the area and largely used by tankers for the movement of premium motor spirit (petrol) had been largely abandoned which is making life unbearable for the residents within the area.

The Chairman of Satelite Town Forum, Michael Imitini, said it is imperative for the government, particularly the DPR to reflect on the effect of spill contents of tankers in the area which is a densely populated residential area and take necessary action to prevent sudden deaths being recorded in the area as a result of road traffic accidents resulting from the activities of the tankers.

Imitini, through a statement he personally signed and released to newsmen, lamented that the lives of residents were no longer safe as a result of the usage of the road by fuel tankers despite its collapsed state.

He, however, urged the Government to rise to the occasion by repairing the road to safe the residents from further damage which is imminent as the country approach the raining season.

“The management and staff of LIRS implore our esteemed taxpayers to stay safe and follow the COVID-19 safety guidelines as issued by the Governor of Lagos State, Babajide Sanwo-Olu, and relevant health authorities,” the notice read.

“We at Satellite Town and Ijegun Egba community of Amuwo -Odofin where over thirteen (13) Marketing petroleum companies are situated in a residential area, and over 1000 tankers and trailers plying a single lane road of Marwa Road on daily basis are still yet to see the commencement of the dualization of the Mumuni Adio Badmus Road, popularly known as Buba Marwa road.

“The road is absolutely too narrow to accommodate these heavy-duty trucks in a purely residential area like that of ours. Let the government and tank farms operators conclude all arrangements to see that works on the above road construction takes effect.

“We have been reading from the news of the good networks of road construction in the nooks and crannies of Lagos metropolis, but Marwa Road Satellite Town where 30% of the Nation petroleum products PMS and Ago’s is lifted, is neglected posing dangers to residents and causing heavy traffic.

“Let the department of petroleum resources DPR, Lagos state ministry of environment, and the tank farms depot owners association operating in Satellite Town see to the yearning and sufferings of the residents of Ijegun Egba and Satellite Town,” the statement read.  read.