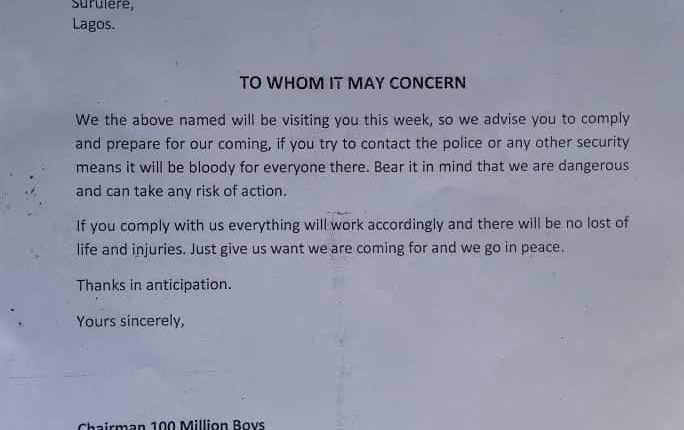 Residents of Surulere Local Government in Lagos State have been thrown into confusion after receiving notification from the dreaded notorious gang popularly called One-million boys of their planned attack during the lockdown.

The fear of the residents Aguda, Ijeshatedo, and environs after receiving the notification from the gang was that the rough-looking boys that often attack communities in their hundreds would not spare anyone that failed to comply with their demands.

Also when the gang arrives in any community, they were always armed with different weapons to ease their operations and chant words that were apparently meaningless but signify actions that must be carried out every minute of their stay within the community.

It was gathered that residents’ experience during the gang’s previous attacks and eyewitness narrations from their recent robbery attacks in Meiran, Abule-Egba, and other Lagos and Ogun states border communities in the wake of the lockdown have continued to send shivers down Lagosians spine.

The activities of the gang had earlier been subsided but President Muhammadu Buhari’s announcement on Sunday, March 29, 2020, of Lagos, Ogun, and Abuja lockdown for 14 days to curb the spread of coronavirus which was further extended on April 13 for another two weeks, assisted the group to relaunch itself and carry out attacks.

And since the lockdown extension was announced, the gang has been said to be responsible for most of the robbery attacks within Lagos, both at night and during the day, forcing many to remain indoors and foodstuff dealers, that were earlier exempted by the President from the lockdown, to shut their premises in order to avoid looting of their goods.

With these experiences, when residents of Surulere woke up to find a letter pasted on walls in their communities, many started panicking over anticipation of what could happen to them when the gang arrives in their usual activities.

In the letter sighted by our correspondent titled ‘To whom it may concern’, the One-million boys urged residents to comply by presenting whatever they have in their houses to them immediately they arrive the community.

“We of the above named will be visiting you this week, so we advise you to comply and prepare for our coming. If you try to contact the police or any other security means it will be bloody for everyone there. Bear it in mind that we are dangerous and can take any risk of action.

“If you comply with us everything will work accordingly and there will be no loss of life and injuries. Just give us what we are coming for and we will go in peace”.

Assuring residents that the Nigerian Police would crush anyone that aimed to halt the peace, the Police Public Relations Officer (PPRO), Lagos Command, Bala Elkana, disclosed that the Police Special Forces led by Deputy Inspector General of Police, DIG Babatunde Ogunyanwo, deployed by Inspector-General of Police, Muhammad Adamu, has been strategically positioned, patrolling the length and breadth of the State.

Elkana said: “The Special Forces were last night deployed to Igando, Idimu, Ikotun, Agege, Dopemu, Abattoir, Mangoro, Alakuku, and other parts of Lagos State to provide round the clock Patrols. The teams have clear instructions to deal decisively with criminal elements operating under whatever guise, in accordance with the law. The Command will not relent on its efforts in protecting the lives and properties of the citizens and residents.

“Members of the Public, especially residents of the communities mentioned above, are enjoined to remain calm and support the ongoing efforts of the Police in ridding the state of criminal elements. The Command with the support of the good people of Lagos State, has dealt a big blow to this criminal gang and several other gangs over the last four months. Over 800 members of the gangs and their leaders were arrested and charged to Court. They are still in correctional centres. No criminal gang is capable of unleashing terror on our communities. We are far bigger and stronger than any criminal elements”.

My campaign for NCDC not to spite Funke Akindele- Toyin Abraham