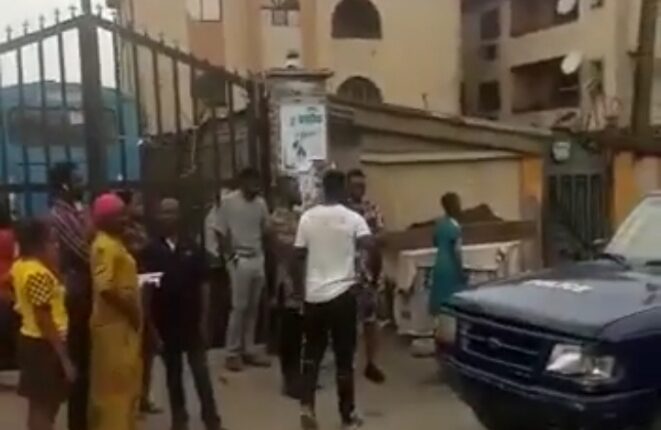 Voter registration exercise was said to have been suspended in the Ijesha axis of Surulere Local Government, Lagos State after Independent National Electoral Commission (INEC) and residents clashed over a decision to conduct the exercise in a catholic church within the community.

As gathered, the clashes started after the location earlier agreed upon for the registration exercise was alleged to have been changed by the INEC officials to St Brigigs Catholic Church, a decision that was said to have attracted the anger of residents.

The earlier location approved by the Lagos Resident Electoral Commissioner (REC) for INEC was said to be No 9A Imam Thani Street before the change which, according to residents, they were not notified before the new location was picked.

Sources said that the change was allegedly perpetrated by one of the residents that offered to provide free transportation service to the INEC official, to aid their movement to Surulere.

The source added that rather than take the INEC officials to the approved location, the resident, said to be a member of the church, told the officials that the church was location approved for the exercise.

It was learnt that the argument on Friday degenerated after some residents claimed that the new location would give some members of the church an undue advantage to complete the exercise ahead of others within the community.

The Guild gathered that the disagreement resulted in some residents moving the machines away from the church to an undisclosed location, an action that resulted in an uproar and an invitation of the Divisional Police Officer (DPO) for Ijeshatedo. 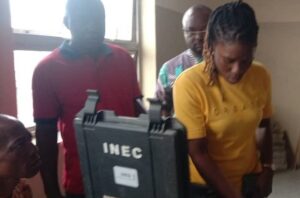 The police, meanwhile, has arrested the INEC officials for creating an illegal permanent voter’s card registration unit in the church auditorium for members.

The INEC staff apprehended by the police include one identified as Rita, Ikechukwu Izuchukwu, and Agbokhna Ebigun, following a complaint by the Chairman, Residents Association, Raji Azeem, to the police about ploys by the church to disenfranchise some members of the public.

According to Azeem, residents have waited to no avail at the INEC recognised registration centre only to discover that electoral officers have been camped at Catholic Church hall attending to members of the church.

He said, “The INEC registration officers, according to INEC provision should be stationed at 9A, Imam Thanni but this was not to be. We have been here awaiting their arrival but when we discovered that they were not forthcoming, we were worried.

Only for us to discover that they have been camped at the St Brigigs Catholic Church auditorium on the influence of the parish priest registering only members of the church while we were in the queue waiting. It was a deliberate attempt to disenfranchise us.

The House 9A Imam Thanni registration centre has remained a constant polling unit since 1983. But the priest decided to play the religious cards by inducing the electoral officers to register only his church members.

The church members have been around since 5 am but we were unaware of their plan until we busted them in action and handed them over to the police at the Ijeshatedo police station. The arrested INEC officers have been crying and begging for their misdeeds.

But they were granted bail by the IPO, Inspector Shola so that they can continue with the registration. He instructed them to return after the exercise and that they should discontinue the exercise at the church hall and move to the venue approved by INEC.”

Another resident, Omolabake Ishola, said the news that political thugs invaded the venue of the registration exercise is false.
According to her, the media platforms are deliberately distorting the truth of the matter.

According to her, “There were no thugs at the registering venue contrary to what is being reported by some media houses. The fact of the matter is that the INEC officers have been compromised and they decided to register only members of the Catholic Church while other residents were left out.

We have been around since 8 am only to discover that INEC officers are at the church hall registering church members. This isn’t fair enough. From what we heard, the Parishioner had announced that he had made arrangements for the electoral officers to come to the church hall to register all members. But we should ask ourselves, is there a registration centre at the church hall? We have to be truthful with ourselves.”

Confirming the clashes, the Command spokesperson, Benjamin Hundeyin, debunked claims that those that moved the INEC machine away were hoodlums, rather they were aggrieved members of the community.

According to him, the INEC officials were assigned to Imam Thani Street by House No 9A for today’s exercise. They were, however, found within the church premises. Residents raised concerns and informed the police. The DPO Ijeshatedo swung into action and brought the INEC officials to the station.

“Preliminary findings show that a resident of the area who volunteered to transport the officials from their office to the center was responsible for the mixup, deliberate or not, further investigation will reveal.

“Meanwhile, the officials were immediately released to proceed to the correct center to continue their assignment”, the command spokesperson added.