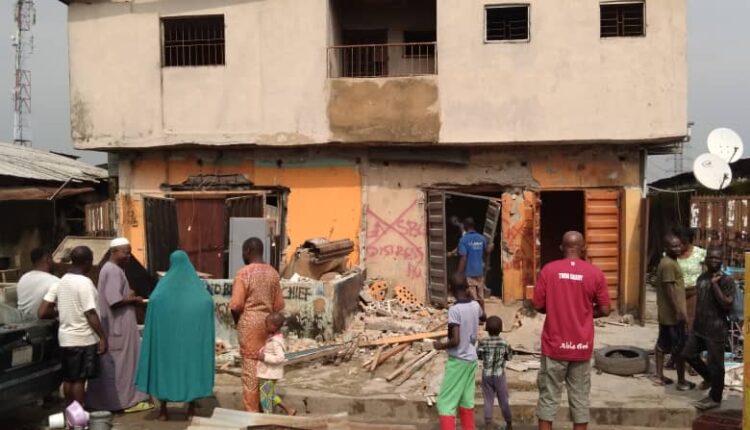 No fewer than 10 families occupying a one-storey distressed building on 19, Kayode Adebiyi street, Mainland Local Government in Lagos State have been evicted by the property owner to avoid loss of lives and property.

The property owner, Ajao Samuel, was said to have evicted the tenants after evidence showed that structure was already troubled, with obvious cracks allover, and the integrity tests result further showed that the building could collapse on the occupants anytime if not removed.

It was gathered that fear of the landlord as downpour intensified in the state was that the cracks on the building has started to become obvious with residents raising alarm that the building was not habitable for the 10 families occupying the structure.

Also the owner, who was said to have purchased the structure last year, fear was that if the building cave in and claim any life, the State Government would take over the property and arraign him before court with count charge that could border on manslaughter and negligence. 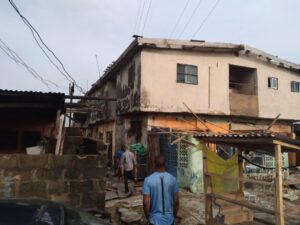 Before the landlord embarked on the preventive measure, residents were said to have urged the State government to come to rescue of the community and avert it from an unforeseen circumstances.

The Guild learnt that the residents, especially owners of adjourning buildings, have expressed fears considering the state of the building and had made complaints to the state government in order to avert troubles that could happen in nearest future.

In response to the residents appeal, it was gathered that Lagos State Building Controlling Agency (LASBCA) deployed its staff to the premises and that the personnel, after accessing the structure, marked the building for demolition.

After the visit, a resident, who does not want his name mentioned, told The Guild that the LASBCA officials returned after a few weeks, served the occupants eviction notice and directed the owner to ensure the structure was pulled down to avert tragedy.

After serving the notice, the agency released a publication, listing the property and 98 others buildings across the state as distressed and issued a seven-day removal ultimatum to the owners of the affected buildings.

In the publication signed by General Manager, LASBCA, Biola Kosegbe, the agency warned that if the owners failed to remove the building, it would pull them down and that cost to be paid by the landlords.

LASBCA stated that all statutory enforcement notices in consonance with the Lagos State Urban and Regional Planning and Development Law of 2010 have been served on the property and others that there had been no response on the directives.

It said: “A final notice is hereby given that if the underlisted distressed structures are not removed within Seven days of this notice by their respective Owners/Developers in line with regulatory provision of the law, such structures shall be removed by the Agency and the cost of the removal shall be borne by the owner/developer”.

The resident added that the occupants, rather than yield, shrugged off the warning and the landlord did not carry out the directives to prevent another tragedy in the state. 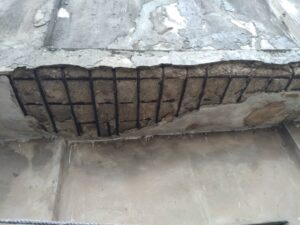 Another resident, Ibiyemi Adekambi, hinted that when the landlord decided to effect the government directives, the occupants refused even after several appeal by the new owner that they should voluntarily vacate the property.

Adekambi disclosed that the building was sold to Ajao last year and that the only option left for the new owner was to demolish and erect another structure considering the depth of dilapidation that had occurred on the building years after its erection.

He noted that the eviction carried out on Saturday was long overdue, just as he commended the owner for yielding to the government directives and residents yearnings that the building could collapse on the occupants.

In an interview with The Guild, the tenants unanimously said that their plans were to leave the house on September 30th when they would have secured another apartment possibly within the community.

The occupants, who admitted that the building was distressed, stated that it was not their wish to remain in the building but lack of purchasing power occasioned by outbreak of coronavirus in the country made them to stay back with hopes to secure another apartment.

According to the occupants, they do not have any grudge against the owner but that they had hoped the landlord could have waited till end of the month before effecting the eviction.

Responding, the owner of the building told The Guild that occupants were evicted because the building was unsafe for habitation and that it could collapse any moment on the tenants if they were not removed. 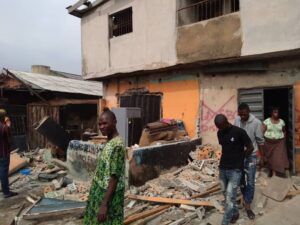 Ajao stated that the move was a proactive measure to ensure that distressed buildings do not collapse on the over nine occupants and that if allowed to collapse, the tenants could suffer severe injuries during the process.

The landlord, who debunked claim that he was not ready to carry out government directives by ensuring the building was pulled down, argued that the delay in eviction and demolition was basically the tenants refusal to vacate even after he approached them individually to appeal that the building posed severe threat to their lives.

He noted that his decision to persuade the occupants, after purchasing the building, was because he had seen a lot of collapsed buildings and the number of causalities recorded after the buildings were allowed caved in on it own. 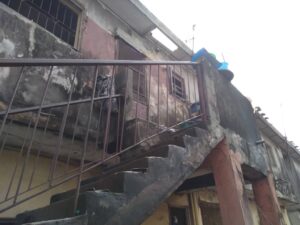 Efforts by The Guild to contact Public Affairs Officer, LASBCA, Tayo Asagba, proved abortive as Short Messages (SMS) were not responded and calls made to her lines did not went through.