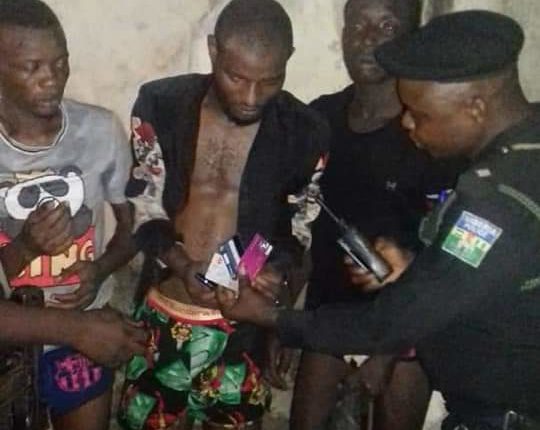 A three-man robbery gang has been arrested by Nigerian Police, Lagos Command after dispossessing a man of his cash and three Automated Teller Machine (ATM) cards in Alimosho Local Government.

The three-man gang, arrested after several successful operations, was known in the council for dispossessing residents of cash withdrawn from ATM machines.

After the arrested on Thursday by Police officers, attached to a special police formation in Lagos, Rapid Response Squad (RRS), a search on the suspects led to the recovery of three ATM Cards of different names and banks.

It was gathered that planned operation was halted after snatching N500 from one Opeyemi Oni, who had just withdrawn cash from Stanbic Bank ATM gallery at Baruwa Gate bus stop in Ipaja, Lagos.

Confirming the arrest, RRS disclosed that the suspects have been handed over to Gowon Estate Division for onward prosecution.