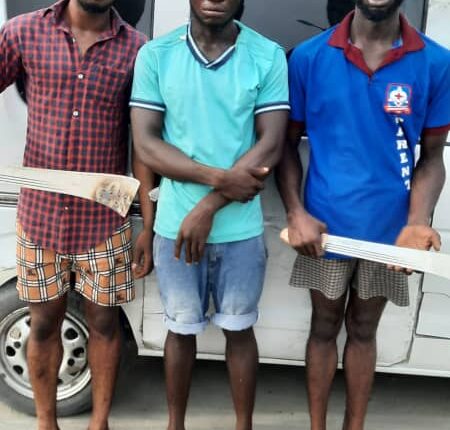 The Nigerian Police, Lagos Command has nabbed three suspected notorious cultists, just as it vowed to take the anti-crime fight of the command to dens of hoodlums and criminals in Lekki and Ajah axis of the state.

It identified the three suspected cultists under detention of the law enforcement agency as Joshua Ubokuho, Emmanuel Yusuf, and Adewale Hammed.

According to the police, they were arrested with some charms and weapons including two cutlasses marked “zero 4” which was the mark on the suspects under detention.

They were arrested at different locations within Imalete Alafia, Ibeju Lekki of the state by police operatives attached to Elemoro Division

The police, in a statement released by its spokesman, Olumuyiwa Adejobi, on Saturday, stated that the mark has been subjected to investigation

While noting that the suspects’ operational bus has been impounded, it added that evidence recovered from the cultists would be used to further get more information about the suspects and their group.

Earlier, the commissioner of police, Hakeem Odumosu, during a meeting with some Stakeholders emphasised identifying and raiding the dens of the bad boys who have been terrorising the good people of Lekki, Ajah, Badore, Sangotedo, Elemoro, Ibeju-Lekk, Akodo etc.