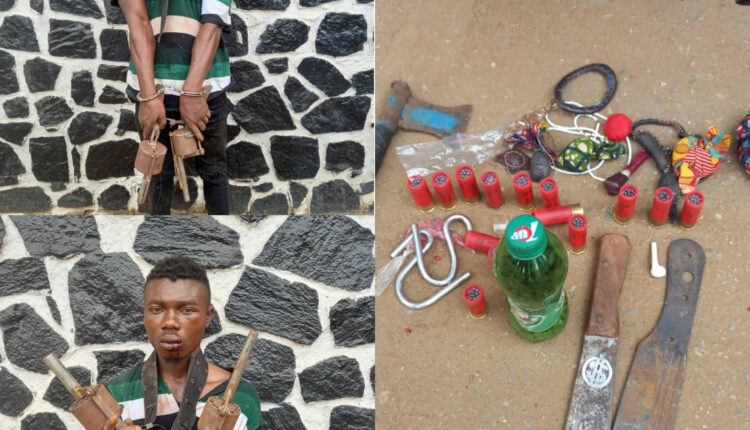 The Nigerian police force (NPF), Lagos State Command has disclosed that it has apprehended an alleged notorious killer, Segun Agodo, said to be connected to series of murders in Odongunyan, Ikorodu axis of the state.

The suspect was said to have been on the police wanted list for a long time until the encounter that led to his arrest when the police detectives came in contact with him in Ikorodu.

It was gathered that several attempts to arrest Agodo, also suspected to be a member of Eye confraternity had been unsuccessful, as he went into hiding after he got wind that he had been declared wanted by the police for his atrocities in the state.

Confirming the arrest, the state’s police spokesperson, Muyiwa Adejobi, said that the DPO Sagamu Road Division and his men were on Surveillance patrol around Ikorodu on Sunday when they sighted Agoro and arrested him.

According to him, the suspect, who has been fingered in many murder cases, including the alleged killing of a policeman in Ikorodu was arrested after he came out of his hideout.

The spokesperson hinted that arms and ammunition were recovered from the suspect. In another development, the police also arrested a 27-year-old suspected armed robber, Sola Akinwole for engaging in an armed robbery in the state.

Adejobi said that Akinwole was apprehended at a motorcycle shop located at AMJE Bus Stop, Alakuko axis of Lagos State. The spokesperson stated that the suspect was arrested where he was robbing alongside his members.

According to him, the police detectives raced to the scene while responding to a distress call from the shop. He noted that the suspected armed robbers had shot one of the guards, Taurus Baba at the shop before the police arrived at the scene.

“One Locally-made pistol and four (4) cartridges were recovered from the suspect,” he said.

Meanwhile, Adejobi said that the state’s Commissioner of Police, Hakeem Odumosu, has directed that the suspects involved in the cases be transferred to the State Criminal Investigation Department for proper investigation and possible prosecution.

Odumosu further stated that the command would leave no stone unturned in making sure that Lagos is rid of criminals, especially cultists who are the major perpetrators of crimes and social vices in the state.