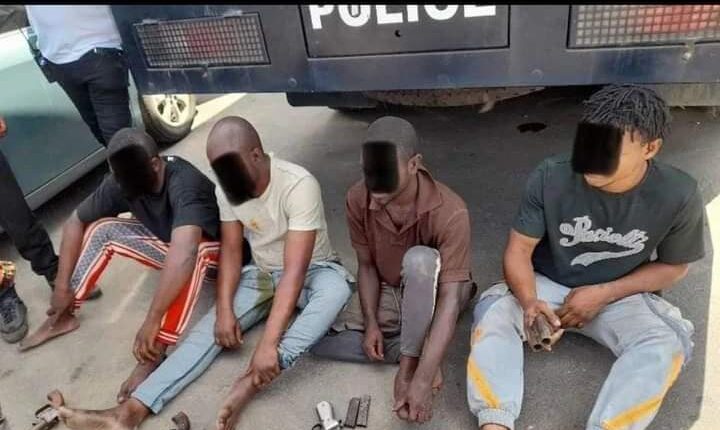 The Lagos Police Command has arrested four suspected armed robbers that specialized in car snatching in Alimosho and Ojo Local Governments in the state.

As gathered, the members of the robbery gang that had become a major threat to motorists was said to often carried out the operations along Iba-Igando-Egbeda axis of the state.

It was learnt that during their operations, aside from snatching vehicles, they also dispossesses commuters of their belongings including Iphones with threats to kill if they turn down their demands.

Confirming their arrest, the Lagos Police Command spokesperson, Benjamin Hundeyin, in a statement made available to newsmen on Saturday, disclosed that they were apprehended, following the launching of a swift investigation immediately a report was received on August 7, 2022.

Hundeyin added that a 2010 Lexus RX 350 Sports Unility Vehicle (SUV), 2006 Toyota Camry saloon car, an iPhone, and other valuables were robbed at gunpoint, which led to their arrest.

According to the statement, Items recovered from the suspects were three locally made pistols, a locally made semi-automatic pistol, and 12 live cartridges.

“Investigations revealed that the suspects were notorious for robbing their victims of valuables and vehicles along the Iba-Igando-Egbeda axis of Lagos State”, the PPRO said.

“Efforts are ongoing to arrest the criminal receiver of stolen goods, and possible recovery other items stolen by the gang in the past, adding that the suspects would be arraigned at the end of an investigation.