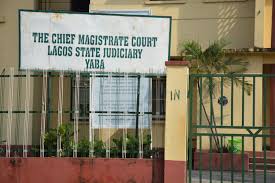 By Olawale Abdul-Fatah
To serve as warning signal to other cult groups in Lagos, the State Police Command has arraigned 35 suspected members of cult groups, Eiye and Aiye, before a Yaba Magistrate Court.
The 35 suspected member of the cult groups were arraigned before a Magistrate Court sitting in Yaba, Lagos State on a two-count charge of conspiracy and membership of an unlawful society.
The defendants arraigned before Chief Magistrate, Mrs. Ayeye, include: Ibrahim Oluwashina, 20yrs; Shokoya Abiodun, 19yrs; Femi Onitone, 21yrs; Jamiu Kazeem, 23yrs; Emmanuel Okpara, 19yrs; Joshua Oyinbuchi, 23yrs; Habeeb Oloyede, 21yrs; Ibrahim Oderinde, 27yrs; Wasiu Oladenjo, 27yrs; Lukmon Quadri, 20yrs; Okechukwu Nsofor, 22yrs; Iweke Paul, 32yrs; Tope John, 30yrs; Samuel Paul, 18yrs,
Others were: Onyebuchi Ejike, 18yrs; Lucky Alfred, 23yrs; Chukwu Jude, 24yrs; Aiyeloja Funsho, 24yrs; Isiaka Olowonifela, 19yrs; Imeh John, 20yrs; Abiola Ridwan, 26yrs; Chinosor Daniel, 18yrs; Ibrahim Mumeen, 19yrs; Frank Akala, 20yrs; Adio Abeen, 27yrs; Olawale Quadri, 23yrs; Toheeb Mukaila, 20yrs; Idowu Daniel, 20yrs; Odunlami Abimbola, 39yrs; Owolabi Dada, 36yrs; Elvis Tom, 18yrs; Solomon Moses, 19yrs; Yemke Adoze, 35yrs; Joshua Esiovwa, 30yrs and Aremu Rilwan, 20yrs.
The prosecuting officer, Adegoke, yesterday, told the court that the defendants on the 20th of November, 2019 in Lagos Magistrate District did conspire among themselves to commit felony to wit, membership of unlawful society, saying, it was an offence punishable under section 411 Cap. CH C17 Vol.3 law of Lagos State.
He added that defendants did belong to an unlawful society known as AIYE and EIYE confraternity and thereby committed an offence punishable under section 42 (a) Cap. CH, C17 Vol. 3 law of Lagos State.
After Adegoke read the counts to the defendants, they all pleaded not guilty, stating different reasons.
Realising they stance, the Magistrate, Ayeye, ruled that the each defendant be granted N200,000 bail with one surety each in the like sum.
She said the sureties must be employed and show evidence of tax payment to the Lagos State Government.
It was gathered that the renewed energy to end cultism in Lagos was re-awake by the new Commissioner of Police, Hakeem Odumosu, with the Deputy Commissioner of Police, State Criminal Investigation Department in Yaba, Yetunde Longe and OC Legal Lagos Police Command, Yetunde Cardoso also being instrumental in their arrest and arraignment.
It would be recalled that Odumosu had warned that under his tenure, the policemen in the state would deal ruthlessly with anyone engaging in acts that against the laws of the state