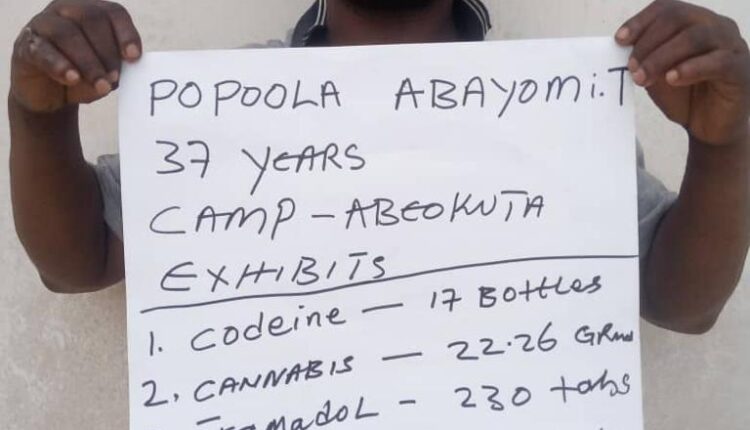 A Paramilitary officer serving in Lagos State, Popoola Abayomi, could be dismissed from service after the Nigerian Drug Law Enforcement Agency (NDLEA) arrested and detained him for allegedly selling illicit drugs to students of the Federal University of Agriculture, Abeokuta (FUNAAB) in Ogun State.

Abayomi was arrested alongside a commercial motorcyclist popularly called Okada rider identified as Ogah, who serves as his dispatch rider, were reported to have been on the agency’s watch list both suspects and they were picked around Camp Area of Abeokuta.

Meanwhile, Ogah, who was well known among the students, was nabbed by the NDLEA intelligence team with six pinches of Colorado weighing 1.17grams.

The Director of Media and Advocacy for NDLEA, Femi Babafemi, who further gave additional details on why they were arrested and detained on Sunday, said that both suspects were arrested last Wednesday and that the items found in their possession further proved their involvement in drugs.

Babafemi, through a statement made available to The Guild, hinted that investigation showed that the paramilitary officer’s wife shop was used as a sales point where the drugs were kept and also serve as a store where Ogah also pick goods for distribution.

The spokesman disclosed that after the arrest, the FUNAAB students hired by some of the suspects’ accomplices mounted a roadblock to prevent their transfer from the community to NDLEA detention.

“After the arrest of the two suspects, some student union officials of the institution blocked the NDLEA team with their official vehicle. The narcotic agents however restrained themselves and after hours of standoff succeeded in moving the suspects to custody”, he added.