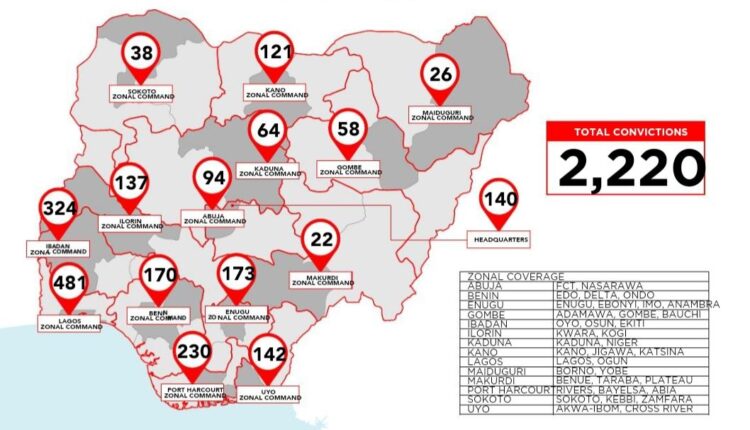 Despite increased anti-graft monitoring and enforcement across Nigeria, Lagos, Oyo and Rivers States respectively have been rated by the Economic and Financial Crimes Commission (EFCC) as states with most cases of cybercrime across the country.

Among the three states, the Lagos EFCC Command recorded majority of the convictions with a total of 481 convictions, closely followed by Oyo Command with 324 convictions, while Rivers command had 230 convictions out of 2,220 total convictions in all its commands across Nigeria.

The total figure of convictios emerged from a review of the commission’s performance last year and the statistics reflected that the agency war stance against criminal activities in the country.

As disclosed in its recently released data, the anti-graft agency described the 2220 convictions as the highest by the EFCC Since it was established and its crime fighting service, adding that it showed how effective and efficient their personnel have worked to ensure that crime was eradicated.

Also, the 2220 record represented a 98.49% success rate in prosecution as the Commission lost only 34 cases during the period under review.

Reacting to the development, the EFCC Executive Chairman, Abdulrasheed Bawa, commended the personnel of the commission for their efficiency and deligience to service despite the challenges of criminal prosecution in courts.

He further assured them that the commission would not fail in its duties of motivating all categories of staff for greater efficiency and higher performance through capacity building and other allowances.