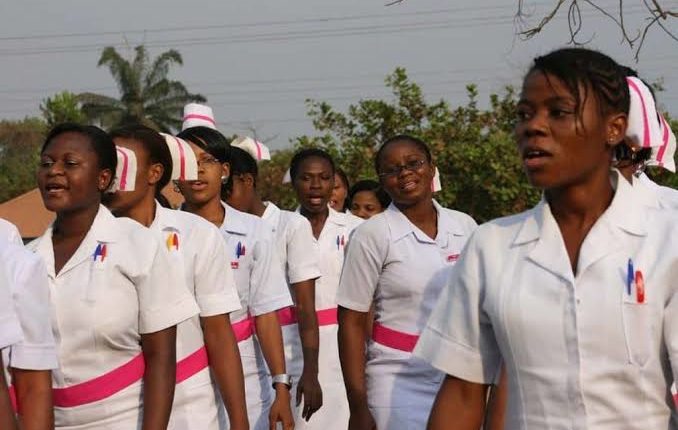 Share
By Monsuru Olowoopejo
Nurses under Lagos public health facilities have raised concern over the current monthly wages and demanded that the State  Government initiate an upward review in salary structure.
The nurses argued that the services rendered by their members in any healthcare facility was immeasurable to the wages received monthly.
A demand for an upward salary review was raised by the nurses when they joined their counterparts globally to commemorate the 120th International Nurses’ week in honour of the Pioneer Nurse, Florence Nightingale in the state.
At the celebration themed ‘Voice of Lead – Nursing the World to Health’, Alimosho General Hospital, Igando apex nurse, Abiiba Abiodun, argued that the nursing profession is a selfless skill directed at preserving humanity through support rendered to an ailing person as well as having an innate ability to foster good health.
Abiodun said: “The hospital is almost inactive without nurses, for we are closer to the patients from the commencement of medical scrutiny till eventual discharge. Hence, the prevailing shortage of nurses in the country needs to be addressed urgently”.
Speaking on the call for improved remuneration for nurses in order to enhance service delivery, the Nurse stated that there is need to review the salaries of nurses based on their work efforts, adding that a full upgrade in Nurses’ wages and benefits commensurate to the risks undertaken would boost their unwavering commitment.
Earlier, the Medical Director of Alimosho General Hospital, Dr. Madewa Adebajo, stated that the nurses in state owned facilities have contributed immensely to the current healthcare success in the state.
“The Nursing profession like other medical cadre, is paramount to qualitative delivery for life preservation. A good number of these nursing professionals provide 24 hours of relentless observations and sacrifices towards patients’ healthcare. Quite evident too that, in this current ravaging pandemic, some of them have paid the supreme price in the line of duty”.
While reflecting on the future of the Nursing profession as a contemporary hope for qualitative healthcare delivery, Adebajo appealed for the inclusion of skilled specialisation in the profession curriculum.
The Medical Director said: “in time past, Nursing schools were the only institutions training professional Nurses but now, Universities offer a Bachelor of Science degree in Nursing”.
He submitted that the roles of nurses should extend beyond taking patients’ vital signs, arguing that they should be able to play major parts in the healthcare system in areas such as Neurology, Psychiatry and Anesthetics, among others, through improved qualitative training.