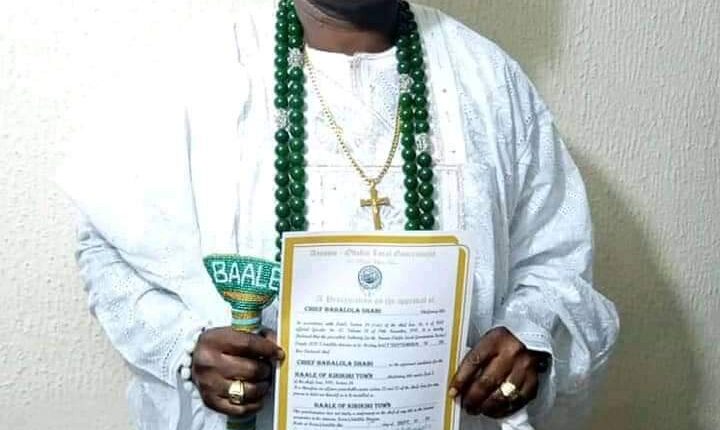 In a bid to ensure peace and harmony, the Alahun of Imoore and Apapa, Oba Taofeeq Adegboyega, was reported to have approached a Lagos High Court, seeking clarification on the alleged report issued by state government on Kirikiri Town in Oriade Local Council Development Area (LCDA) stool which nolified earlier installation of Babalola Shabi as the chief for the town.

The monarch, was said to have approached the court, seeking judicial interpretation of traditional rulers role on conferment of titles within their domain particularly as it concerns the Lagos State Ministry of Local Government and Community Affairs report on selection and installation of Kirikiri town chief.

Residents of  Imoore and Kirikiri Communities, meanwhile, have commended the move by the monarch to restore peace and harmony across the council.

The Residents of Imoore and Kirikiri Communities at the Oriade Local Council Development Area (LCDA) Lagos State, have hailed moves by the Alahun of Imoore and Apapa, Oba Taofeeq Adegboyega, to restore peace in the Kirikiri Community after approaching the State High Court, seeking clarification on the alleged report issued by state government on Kirikiri Town stool.

They added that the move by the monarch to seek clarification from court on the alleged report would assist to avert bloodbath and future face-off within the town.

The residents, who described the Lagos state government report as frivolous, bias and unacceptable, alleged that some officials of the ministry had on their own choice, created two ruling houses, Agunbiade and Folami, ruling houses of Kirikiri Town, which were not in existence.

According to them, after the report was issued March 10th, 2021, the community has been thrown t A move they said has since thrown the entire Kirikiri community into disarray, as one Anthony Folami, has allegedly been parading himself as the Baale of the Kirikiri Town.

Some members of the Kirikiri Community Development Area (CDA) who spoke to The Guild lamented that the committee turned itself into a court of law by stating that there are two ruling houses in Kirikiri town, whereby there are no ruling houses community and there are also records, at the Ojo and Amuwo Odofin Local Government Secretariats to show for it.

They stressed that the panel threw away all evidences and documents brought before it, indicating that Kirikiri Town belongs to the Imoore Kingdom and the Alahun of Imoore and Apapa has the paramount ruler who has the sole responsibility to appoint and install the Baale of Kirikiri Town.

Accpording to them, efforts to make the panel understand that the late Baale of Kirikiri town was nominated my members of the Kirikiri CDA, as the community is a cosmopolitan town and its residents are most none indigenes, who bought their landed properties from the Imoores Family, before they are installed by the Alahun of Imoore, fell on deaf hears and the panel went on to issue a report which is about tearing the community apart.

A member of the Kirikiri CDA, Taiwo Wasiu, who spoke to journalists on the development said; “the Ministry of Local Government and Community Affairs had through it report attempted to create a huge problem in Kirikiri town. They created ruling houses that was not in exitance in community and the person they recommended to be the Baale is going about causing trouble in the community.

Wasiu said: “How on earth can you classify families who came into a community the same way every other residents came a ruling house, when they have no ancestral root to that community . The so-called Agunbiade and Folami families, leased their lands, which they built their houses on from the Cardoso and Shokunbi families, who also bought their lands from the Alahun of Imoore and they are tenants like every other residents.

“The panel even failed to identify the Cardosos and the Shokunbi families as rulings house who are even the people who bought directly from the Imoore Family, they went on to identify the Agunbiade and Folami who leased their lands from the Cardosos and Shokunbi families as ruling houses. We wonder where they got that idea from.

“While at the panel, we presented several documents showing that these people are tenants like every other residents of kirikiri town, but they looked the other way and came up with a frivolous repot that is currently steering trouble in kirikiri Town. Even the man, Anthony Folami, who they recommended to become the Baale is not even a Lagosian. He is from Bida area of Niger State and he has no house in Kirikiri town.

“The only link he has with the Kirikiri community is just the Igunuko confraternity and its shrine. But Chief Shabi is a resident of Kirikiri that has invested heavily and has served the community in various capacity, even as it’s Chief Secuirty Officer, where he earned himself several enemies in cause of fighting crime”, he added.

Earlier, it was learnt that crisis started after Adegboyega, who is the paramount ruler of Imoore, Kirikiri, Apapa, and Awodi-Ora Towns on July 18th, 2020, installed Shabi, a real estate mogul and security expert, as the new Baale for Kirikiri town.

Shabi, an indigene of Lagos, who had spent over 40 years in the town, was picked by elders and youths of the Kirikiri (CDA) as earlier done for previous Chiefs, and installed by the monarch, a ceremony that was followed with a certificate from the council, Oriade LCDA.

It was gathered that few months after his installation and certification by the Oriade LCDA, some members of the Igunniko confraternity, who has a shrine at the Agunbide axis of Kirikiri Town, felt displeased with Chief Shabi’s installment because he is not a member of their confraternity and instead going to court, they were alleged to have written a misleading petition to the Lagos State Ministry of Local Government and Community Affairs and a committee which has a member of a the Folami family in it was set up.

Aisha’s criticism of my government is good for democracy- Buhari