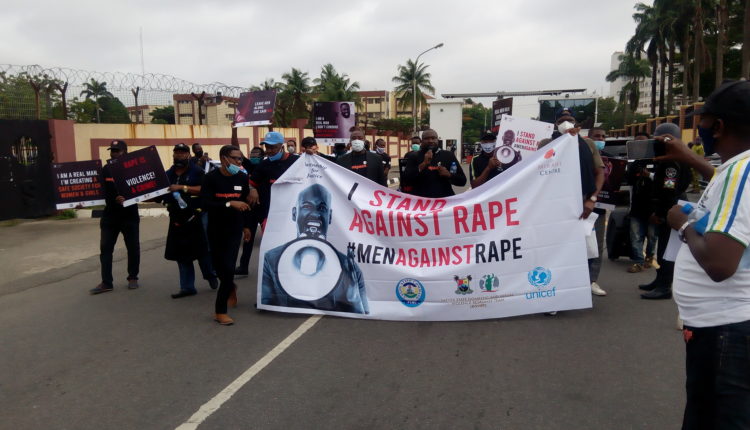 Dozens of men on Thursday stormed the office of the Lagos State Governor, Babajide Sanwo-Olu, to march against the scourge of rape and sexual violence in the country and pledged to stop colluding with other men perpetuating the act as well as work to end the violence against women and girls.

The men, who were armed with placards filled with different inscriptions to express their displeasure over the act perpetrated against women in Lagos and across the country, stated that the march was to further declare their readiness to challenge individual sexist, misogynistic belief and attitudes in the country.

According to the protesters, we can no longer live in a society where women and girls cannot move freely because of the danger they face from men and boys in society. And when rape happens, nothing indicts good men than silence.

Speaking on behalf of the protesters, Chico Aligwekwe, disclosed that they embarked on the protest to show their concern over the unending spate of rape and sexual violence and that every rape casts aspersion on all men and challenges the claim to manhood.

Aligwekwe said: “Every incident of rape questions our definition of masculinity and threatens the very essence of our humanity as men. So, the rape of one woman or girl should give every man something to worry about. It is a bereavement that we should all mourn collectively because of what truly dies in the woman.

“The silence of good men may be convenient stand but it empowers the rapist, condemns and dehumanize the victims and further deepens a rape culture. So we call on every good man in this country to rise up and speak out against rape. We call on every man, anywhere in this country, to take responsibility for creating a society that is safe for all women and girls”.

Addressing the protesters, the wife of the governor, Ibijoke Sanwo-Olu, told the protesters that the government has zero-tolerance for rape and sexual violence acts and that law enforcement officers have been empowered to protect victims and prosecute perpetrators.

According to her, part of the protection for victims is that we have empowered our 57 Primary Healthcare Centers (PHCs) to attend effectively to victims of rape as well as deploy kits (rape kits) to assist them to test anyone that fell victim and aid law enforcement with a proof for onward prosecution.

Sanwo-Olu added that the government would not hesitate to publish names and pictures of any perpetrator that has been convicted by the court in Lagos, saying, we will publish the name and picture in all councils in the state.

“This disturbing and utterly alarming finding shows that a lot is required to defeat this monster and we are prepared to do what it takes to end rape and all form of Sexual and Gender-based violence against women and children in our dear State, and by extension Nigeria.

“The Lagos State Government, as you are aware, has zero tolerance to all form of Sexual and Gender-based violence and this informs the various initiatives and programmes firmly put in place by successive administrations up till now to tackle such bestial act headlong.

“It is equally noteworthy that the 36 First Ladies in Nigeria are equally championing the cause to end rape in the country. To defeat it requires a collective effort and it is gratifying that this is receiving the necessary attention”.