Lagos Govt. to go after Magodo estate invaders, other perpetrators 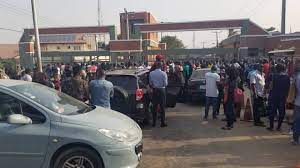 The Lagos State government has commenced investigations on the invasion of Magodo Phase II Estate with a view to prosecuting any person found culpable in the actions that had attracted public outcry.

It said that the decision to embark on the investigations and to prosecute anyone found culpable of the action was due to the high regard the government has for the rule of law as well as the will to protect interests of all parties attached to the disputed land in the state.

The government stated that it discovered that a party to the land had allegedly misled the Nigerian Police in a bid to enforce a judgement secured on the land which the estate was sited.

Announcing the ongoing investigations, the Attorney-General and Commissioner for Justice, Moyosore Onigbanjo, through a statement released yesterday, called on the residents of the estate and members of the public to remain calm pending the outcome of the investigations on the invasion carried out last Tuesday.

According to him, the State Government enjoins the general public to remain calm especially Residents of Magodo Residential Area, while an investigation into the unwarranted incident is being carried out with a view to prosecuting any person found culpable.

“The Lagos State Government has high regard for the rule of law and will protect the interests of all parties”, Onigbanjo added.

He said the government was concerned that the landowners, under the Shangisha Landlord Association led by one Chief Adebayo Adeyiga, misled the Nigeria Police in an attempt to execute a judgment of the Supreme Court, notwithstanding the pending appeal against the issuance of a warrant of possession by the then Chief Judge of Lagos State on March 16, 2017.

He maintained that the judgment creditors had no claim for possession, and none was granted as no survey plan was tendered before the court.

“Several attempts by the state government to resolve the matter amicably have been on even before the judgment of the Supreme Court was delivered,” he stated.

“It is, therefore, not surprising that the Supreme Court held on page 27 of the judgment thus; ‘this court appreciates the magnanimity of the Lagos State government in the proposals to effect an amicable settlement of this matter. The ball is now in the court of the counsel to the respondents who has a statutory duty to advise them properly to give the government their maximum co-operation in the execution of this judgment.

Subsequent to the rejection, Onigbanjo explained that the state government got engaged in dialogue with the majority of the judgment creditors from 2019 with a view to reaching a concession towards implementing the judgment.

“On the 21st of December, 2021, it was reported through social media platforms that the Shangisha Landlords Association with stern-looking policemen took over Magodo Area of Lagos State in the purported execution of a Supreme Court judegment.

“It is a known fact that judgment was delivered in 2012 by the Supreme Court in Military Governor of Lagos State & Ors. Vs. Adebayo Adeyiga & Ors in Appeal No: SC/112/2002 wherein the Apex court affirmed the judgment of Court of Appeal and High Court delivered on the 31st of December, 1993 in Suit No: ID/795/88 wherein the Court held as follows:

“An order of Mandatory Injunction is hereby made that the said defendants shall forthwith allocate 549 (five hundred and forty-nine) plots to the plaintiffs in the said Shangisha village scheme in the Shangisha village aforesaid.”

According to the AG, it is obvious from the declaratory judgment of the Supreme Court that the judgment only recognised the judgment creditors as being entitled to first choice preferential treatment in the ‘allocation and or re-allocation of plots in Shangisha Village’.

He added that the judgment only related to the allocation of 549 plots of land and not the possession of any land.

“Noteworthy also is the pending application for interlocutory injunction dated 1st December 2020 before the Court of Appeal in Appeal No. CA/L/1005A/2018 seeking an order restraining Chief Adebayo Adeyiga and others (including their agents, servants’ privies, or howsoever called, particularly the police) from entering into, giving direction, taking possession, or in any manner disturbing the quiet enjoyment of property owners in Magodo Residential Area Scheme,” the commissioner said.

“The Lagos State government has equally observed that the execution was carried out by unknown bailiffs as the sheriff of the High Court of Lagos where the judgment emanated was not responsible for the purported execution carried out on the 21st December 2021 at Magodo.

“The purported execution is therefore contrary to Order 8 Rule 17 of the Supreme Court Rules 2014 and Section 37 of the Enforcement of Judgment and Orders Part III of the Sherriff and Civil Process Act, LFN, 2004.”