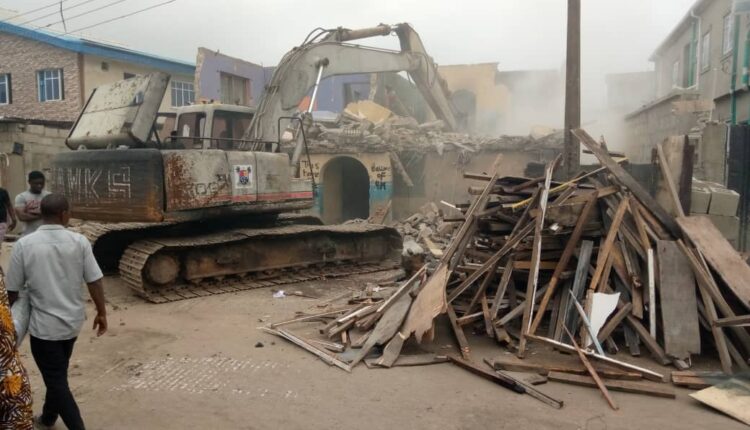 The Lagos State Building Control Agency (LASBCA) has pulled down about 15 distressed buildings, as part of measures to avert loss of lives and property across the state within one week.

LASBCA said that the buildings were brought down to rid the state of distressed and nonconforming buildings as well as ensure residents of Lagos do not suffer any loss due to collapse buildings.

The agency noted that all actions were embarked upon to achieve the state’s vision of zero tolerance on building collapse and haphazard development within Lagos.

Speaking to newsmen on Friday after LASBCA averted collapse building, pulling down a distressed one-story structure at 12, Simbi Street, Shogunle, Oshodi, the agency’s boss, Gbolahan Oki, said that the affected buildings were either identified as weak, erected on drainage channels and structures found on setbacks approved for canals.

Oki noted that these buildings were identified by the agency and other experts as a threat to Lagosians and that their owners were prevailed on to tow the global best practice standard, saying but they declined and allowed the building to remain until this week.

Speaking further, the LASBCA  boss said that some of the identified highly distressed structures failed Non –Destructive Structural Integrity Test while some were haphazard and nonconforming buildings built on drainage channels before the demolition.

According to him, consequently, the building owners were served all statutory enforcement notices in consonance with the Lagos State Urban and Regional Planning and Development Law of 2019 as amended and none responded to the demolition exercise were carried out as stipulated by law.

Oki added that the demolition was a signal to any recalcitrant developer that aimed to circumvent rules and regulations guiding construction, noting the structures shall be removed and the cost of removal would be borne by the owner.

The General Manager noted that people have shown disregard for the state laws on building construction in the past which the resultant effect had previously been worrisome.

Oki, meanwhile, through a statement by Asst. Director, Public Affairs unit for the agency, Abdulraheem Gbadeyan, appealed to building owners and developers to desist from starting construction of building for both private and commercial purposes to obtain necessary building approvals.

He insisted that building owners/developers should seek authorisation from LASBCA, hire the services of relevant professionals, speak to safety and
obtain development permits before the commencement of building construction subject to the type of structures they are putting in place to make the building safe, secure, and fit for habitation.