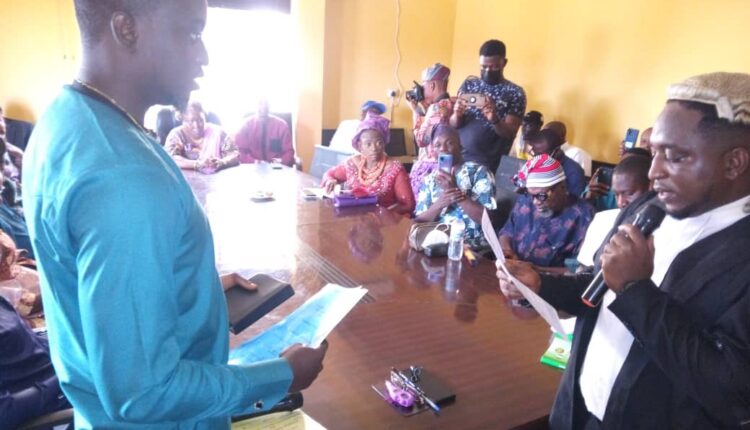 The Lagos State Government has sworn in the People’s Democratic Party (PDP) Councillorship candidate, Mustapha Olanrewaju, as the councilor for Oriade Ward A, Kirikiri, Oriade Local Council Development Area (LCDA) in the state.

The development followed the Appeal Tribunal hearing cases on the Lagos council poll ruling which declared that the PDP’s candidate as winner of the exercise and ordered that the All Progressives Congress (APC) candidate, Onyeahasi Omolabake, should cease to parade herself as councillor for the ward.

Speaking during the swearing in ceremony held at the council’s chamber on Tuesday, the Executive Chairman of Oriade Local Council Development Area, Ramotalai Hassan, congratulated Mustapha for reclaiming the mandate given to him by majority of the people of his ward, through the instrumentality of the law and not violence.

Furthermore, he urged the new council boss to be magnanimous in victory and also show his readiness and willingness to cooperate with her administration, in line with commitment to move the council forward.

The council chairman informed Mustapha and his PDP entourage that they should see themselves as major stakeholders in the effort to make Oriade Council a better place to live in, adding that he should see himself as part of one big family system operated by her administration.

Hassan also advised the councillor to work assiduously and passionately with the other six councilors, by making laws that would serve the interest of the people.

In his own address, the Leader of the council’s Legislative Arm, Shittu Jimoh, welcomed the PDP councilor on board the business of law making at the grassroot level, urging him to interact freely with them.

In his remarks after he took the oath of Office before one of the council’s legal officer, Sadiq Fatai, Mustapha expressed his appreciation to God, family, and his political party for the positive outcome of his struggle to reclaim the mandate.

He also expressed appreciation to the council chairman for the warm reception accorded him and his entourage. He assured the council chairman and his colleagues in the Legislative Arm of his maximum cooperation in the common goal to give the people of Oriade LCDA, the dividends of democracy.

The Swearing-In Ceremony was witnessed by the six councillors elected under the platform of All Progressive Congress (APC), the Director of Human Resources Department in the council, Mojeed Onadipe, who represented the Council Manager, Engr Akitoye Semiu, Clerk of the council’s Legislative Arm, Raji Sulaimon, Heads of Legal and Public Affairs Units, Adebisi Idayat, and Chief Rabiu Abiodun Hassan respectively, Chairman of PDP in Oriade LCDA, Jelili Alebiosu and other chieftains and members of the party.