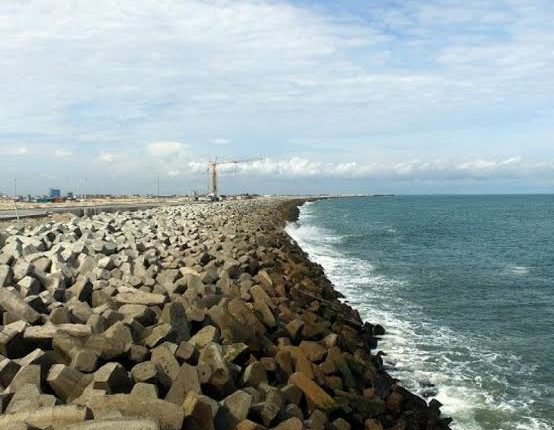 Share
By Monsuru Olowoopejo
In a bid to mitigate erosion in Lagos, the State Government has urged the Federal Government to support the ongoing efforts to protect the country’s coastline from erosion.
It further said that about N400 billion would be required to complete the ongoing work to save the nation’s coastlines which was already been threatened in some parts of the state.
The Commissioner for Waterfront, Kabiru Abdullahi, made the appeal at the Year 2020 Ministerial Press Briefing in commemoration of the First Year in Office of Governor Babajide Sanwo-Olu, held at the JJT Park in Alausa, Ikeja.
“The erosion of Lagos coastline is a direct impact of the construction of the Eastern and Western Moles by the Federal Government as far back as 1912 to provide safe access for vessels coming into the Lagos harbour. This has put a heavy financial burden on the State with regards to the protection of its coastline”, Abdullahi added.
The commissioner stated that the state government had single handedly constructed 18 groins and needed to construct 60 extra to wade off violent ocean currents that was currently eating up the nation’s coastline and causing environmental degradation, erosion and flooding.
Groins are man-made structures designed to act as breakers to trap sand moving down beaches.
“On the Eko Atlantic City Project, so far, 18 groins have been constructed at 400 metres intervals covering a distance of about 7.2 kilometres. We still have about 60 kilometres to go which is estimated to cost about N400 billion.
“This is something that is very huge and of course, not a dime of the Ecological Funds have been accessed on this. It has all been financed by the state”, he added.
The commissioner also urged the National Inland Waterways Authority (NIWA) to create channels for boat navigation on the waterways and stop enabling illegal dredging activities, stressing that the Agency needs to support Lagos in preventing the degradation of Lagos shoreline, road infrastructure and halting environmental pollution.
“NIWA should refocus its attention on its primary mandate, which is to create channels for boat navigation on the Waterways, instead of acting as land speculators among others.
“We have issues with certain federal government agencies participating in certain activities, land speculations, reclamation of land for urban development, dredging activities, creating serious environmental issues for us in Lagos.
“I believe these are areas the federal government agencies should focus their attention upon and put in money into this project. This so much a huge burden for the state government to carry. This is a protection of the Nigerian coastline, it should not be left for the state to carry,’’ he said.
Abdullahi further stated that a total of 34 dredgers operating illegally were arrested and prosecuted by the State Taskforce on Environment and Special Offences during the period under review.