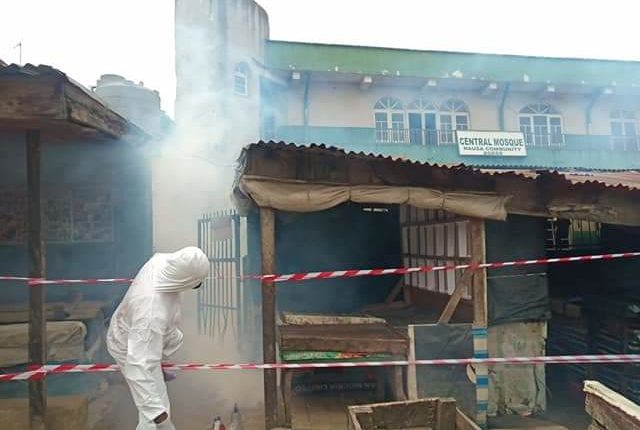 Hours after worshippers of a popular Central Mosque in Agege attacked officials of Lagos State enforcing lockdown order pronounced by President Muhammadu Buhari, the Government has shut and fumigate the mosque, for violating order on religious gathering in the fight against spread of coronavirus.

Few minutes after the prayer, the mosque with over 300 Muslim worshippers, was said to have attacked the enforcement team when they visited the premises, caution the worshippers against flouting social distance directive of the government.

Following action of the worshipers, the Council on Thursday sealed up the mosque after a fumigation exercise led by the Chairman, Kola Egunjobi, who stressed that the closure became necessary to avert recurrence and serve as a deterrent to other erring faith groups or worshippers in the council.

Egunjobi said: “We cannot continue to condone act capable of spreading this dreadful disease. Even Saudi Arabia placed restrictions on the number of people who must worship in the two holy mosques, Haram and Nabawi and banned congregational prayers in all other mosques across the country.

“Honestly speaking, we cannot be more Roman than the Romans. So we have had an engagement with the leadership of the mosque including the Sarkin Hausawa, Musa Muhammed, and our resolution is that it should be shut down till further notice,” the council chief said.