Our food program for lockdown was sabotaged-Sanwo-Olu 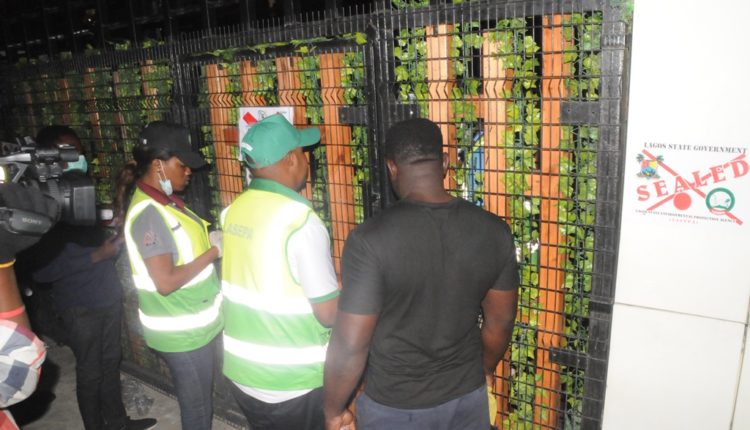 Following records of more cases of coronavirus in Nigeria, Lagos State government has intensified enforcement on social gathering policy that restricted more than 50 people from converging at any location, sealing another club for violating the order.

The club, Xhale Shisha Lounge, Victoria Island, was sealed by the Lagos State Environmental Protection Agency (LASEPA), increasing the number of outfits sealed by the agency for flouting the order aimed at preventing spread of coronavirus to six across the state.

Other outfits earlier sealed by the agency were: Regency hall, Imperial hall, Matinos hall and suites, Famcity club, Prime mall and Mega one Plaza in Lekki.

The State Government also hinted that over 70 calls were received from residents, who reported their neighbours that organised ceremonies with nearly 200 participants. Some of the functions were naming ceremonies and other forms of gatherings.

While urge everyone to join hands with the government to minimize the spread of the pandemic, General Manager of LASEPA, Dr Dolapo Fasawe, who spoke during the enforcement of the governor’s directives restricting social gathering, said that agency would not rest on its oars until people voluntarily comply with the new directives.

Fasawe, who attributed frequent calls by the residents to alert the agency on illegal gathering to the weekend enforcement where six-event centres , hotels and clubs were sealed. This is a reflection of oneness and collective responsibility as a stakeholder in the affairs of the state.

The GM said: “The directive was meant to ensure the safety of everyone. You can postpone your birthday, wedding or whatever ceremony, only the living celebrate these ceremonies. That’s we all must comply with this. We shouldn’t because of any gains endanger the lives of others by Organising parties at this time.”

To the club owners, Fasawe urged them to stop harbouring people in unsecured and unventilated areas, to hide from the authority and also prevent sanctions, saying everyone must adapt to the changing lifestyles necessitated by the outbreak of the coronavirus.

We received cases of some schools encouraging their students to come to school in mufti to enable them to complete their exams. This is unacceptable and no hidden place for violators of government directives.

Fasawe urged residents to always share information with the government, if they suspect any social gathering in their domains, saying ” if you see something, say something because that party in your neighbourhood could endanger your lives if you keep quiet since you would not know who has the virus among the multitude of people in the party.”

She also urged all public and private institutions to install handwashing infrastructure as well as provision of sanitizers at their facility entrances and must ensure usage by the staff and visitors, saying that LASEPA enforcement teams are out to ensure full compliance of this safety precautions.