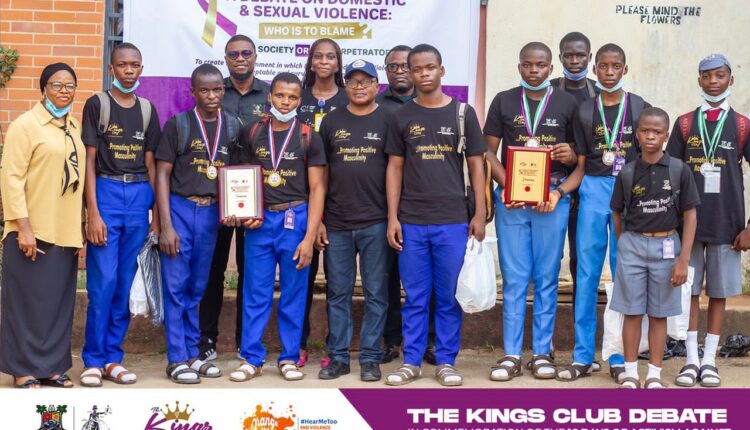 In commemoration of the 16 Days of Activism for the elimination of violence against women and girls, the Lagos State Government through its Domestic and Sexual Violence Agency has rewarded schoolchildren that emerged tops during a debate organised to sensitize male students and make them agents of change across the state.

The debaters, who represented their schools, were rewarded by the government after they were adjudged by the panel for garnering more points than their peers, showing their understanding of the issues on domestic and sexual violence in society.

The Immaculate Senior High School students won the debate after scoring a total of 337 points and each representative received a cash prize of N50, 000.

Before they were awarded the points, the different debaters canvassed their positions and ultimately encouraged members of the public and State Government officials to ensure domestic as well as sexual violence becomes a thing of the past.

The debate took place yesterday at Oregun Junior and Senior High School, Kudirat Abiola Way, Oregun, with the topic: Domestic and Sexual Violence; who is to blame? The Perpetrator of the Society? and had in attendance Counsellors and Teachers, to monitor proceedings.

And the male students were drawn from Education Districts II, IV, V, and Lagos Mainland Primary school students comprising a total of 125 students selected from about 20 schools in the state.

The rewards were disclosed through a statement made available to newsmen by the executive secretary of the Lagos State Domestic and Sexual Violence Agency, Titilola Vivour-Adeniyi, yesterday.

Vivour-Adeniyi explained that the ultimate goal of the Kings Club project, an initiative of the Lagos State Domestic and Sexual Violence Agency, was to create a sustainable structure in educational institutions that would help debunk socio-cultural misconceptions, promote positive masculinity.

She added that a culture that would bring about behavioral and attitudinal change in the minds of young boys within Lagos State, saying we believe that this will further help prevent the occurrence of Sexual and Gender-Based Violence (SGBV).

Parts of the statement read: “Our panel of Judges and Special Guests including Taiwo Akinlami, Unwana Esang, Dennis Onoise, Victor Okpala, Lukas Koyejo, and Oladipo charged the boys to remain committed in school and use their gender to protect, promote and uphold gender equality.

“The Audience was not left out of the fun as they were entertained with a brief interlude of various poem recitations and quizzes. Winners of the quiz were awarded consolation prizes”.