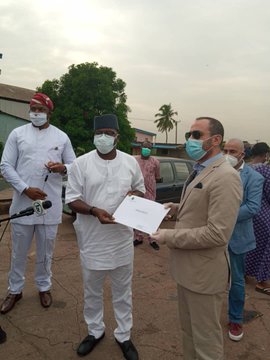 The Lagos State Government has disclosed that it had taken delivery of ambulance and some food items from the Lebanese community in the state.

It explained that the eight truck-loads of various food items and the ambulance donation from the Lebanese community was to support the government response in its fight against the deadly respiratory disease.

The Government said the Governor Babajide Sanwo-Olu-led coronavirus response team’s approach in handling the index case and accompanied cases, and measures put in place in its public health response and protocols had spurred private individuals, cooperate bodies and expatriates like the Lebanese community in supporting the government.

The state government made the announcement through a post on its social media page on Tuesday, saying the donations will be put into good use towards gaining control against the virus.

“The Lebanese Community in Lagos today donated eight truck-loads of various food items and an ambulance worth N82.5 million to the Lagos State Government in support of the fight against the COVID-19 pandemic'” the government said.

The Lebanese Community in Lagos today donated eight truck-loads of various food items and an ambulance worth N82.5 million to the Lagos State Government in support of the fight against the COVID-19 pandemic@jidesanwoolu @lagosagric1 #CovidLASG
Read More.. https://t.co/jbGTSaDpQp pic.twitter.com/eBJsrC6b50